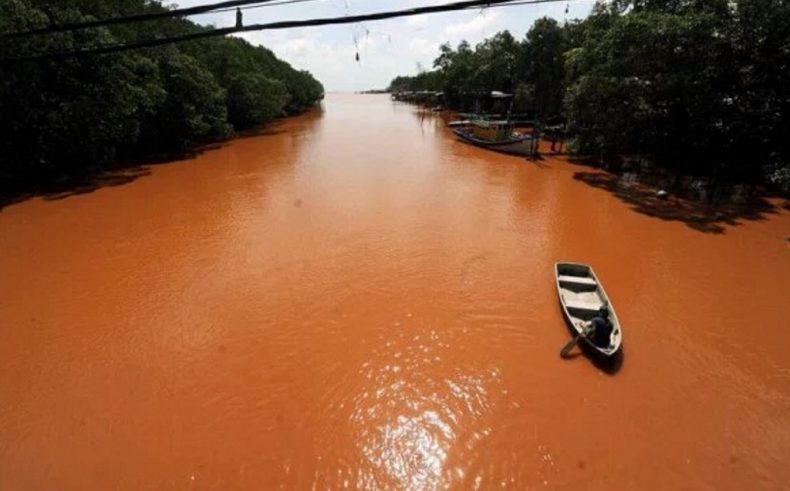 The water of Sungai Balok in Pahang turned a toxic red in the wake of extensive pollution from unregulated bauxite mining in the state last year. Photo Credit: Malay Mail

The moratorium on bauxite mining in Pahang has been extended again, for the third time, until the end of the year. The ban, which was scheduled to expire on September 14, has been extended by the federal government because local operators have still not managed to clear up existing stockpiles of the aluminum ore in Kuantan.

Back in the middle of July the moratorium, first imposed in January for three months, was re-extended to allow operators more time to set their houses in order after largely unregulated mining in 2014 and 2015 wreaked havoc with the state’s environment. Yet despite all that extra time, some 4.13 million tons of uncleared bauxite ore remains stockpiled at three sites around Kuantan.

“If come Dec. 31 the stockpiles are not cleared, I’m going to ask for (another) six months moratorium,” Natural Resources and Environment minister Wan Junaidi Tuanku Jaafar has pledged. That stance is commendable. Whereas the mining of bauxite, most of which was exported to China, brought considerable financial benefits to Pahang last year, it did so at a terrible cost to the state’s environment.

Helter-skelter open-pit mining led to massive pollution in the water, air and soil of Kuantan, triggering a nationwide public outcry. Local officials turned a blind eye to the activities of local miners and refused to take responsibility for the fiasco. They were duly and rightfully slammed by environmentalists. Experts have warned that the area’s environment might take years, if not decades, to fully recover. The widespread pollution of the local air and water sources could also pose serious long-term health hazards to people, they added.

With all that in mind, the new extension to the moratorium has come as a welcome development. Economic progress is a needful feature of an increasingly prosperous nation like Malaysia, but it must not come at the expense of the country’s world-famous environment.