Banking on the Death of Forests 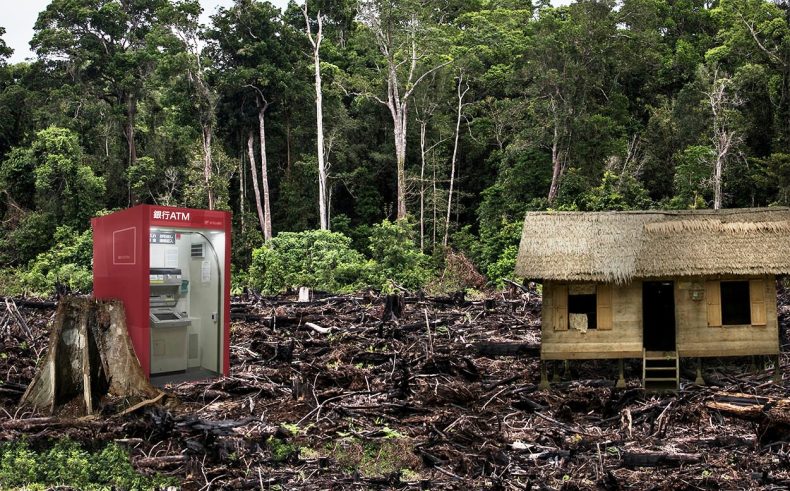 The world of finance is driving deforestation across Malaysia, Indonesia and the rest of the region. Photo Credit: Rainforest Action Network

Many banks treat forests as exploitable resources; so much so that they are behind massive deforestation across Indonesia and Malaysia. By financing companies that cut down forests for profit, the banks are key drivers of forest loss in these two countries, and farther afield.

This is according to the US-based green group Rainforest Action Network (RAN), which has produced a damning new report, “Forest & Finance,” linking the world of finance with the destruction of forests. Between 2010 and 2015 lenders from around the world gave an estimated total of US$50 billion (RM205 billion) to corporate entities, including palm oil companies, that engaged in extensive deforestation in the two countries.

The total value of loans Malaysian banks gave to companies engaged in forest clearance amounted to US$7.7 billion (RM31.6 billion). The top two financiers of companies that posed threats to forests were Malayan Banking and CIMB in Malaysia: each provided loans amounting to US$2.5 billion (RM10.25 billion) for such purposes. In Indonesia, Bank Mandiri came out on top as the main financier of forest-risk businesses by lending more than $1 billion in loans to such ventures. Coming close behind were Bank Negara Indonesia and Bank Rakyat Indonesia, which gave loans of $678 million and $458 million, respectively, to companies engaged in deforestation.

The top financiers of palm oil and other forest-risk companies in Malaysia and Indonesia have been a large assortment of leading banks and investment groups from Malaysia, Indonesia, Japan, China, the United Kingdom, the European Union, the United States and Singapore. Between 2010 and 2015 these global banks and investors (including HSBC, Citibank, Morgan Stanley, Credit Suisse, Deutsche Bank, Standard Chartered, Maybank, Mizuho and DBS) pumped US$50 billion into forest-risk companies, RAN notes.

“Forest financing is murky and sometimes you just don’t know where exactly the money goes – which is why we’re doing this, so that we can add more transparency to the funding scheme,” said Adelaide Glover, RAN’s Forest & Finance program coordinator.

Globally, 2 billion of us have bank accounts, yet without our knowledge, RAN explains, our banks may invest our money into companies that decimate forests so as to cultivate rubber or palm oil, obtain timber or produce pulp and paper. They are “making big profits for bankers and investors while ruining (local) people’s lives, taking land from indigenous people, removing habitats for endangered species and worsening global climate change.”

So what can we do? We can stop banking with banks who lend money to companies that destroy or despoil forests, that’s what.