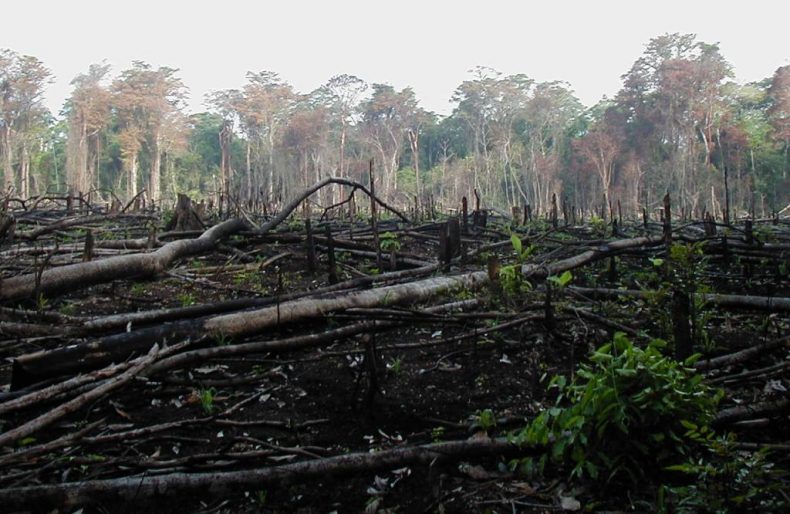 The loss of natural habitats has been proceeding at alarming rates. Photo Credit: Wikimedia Commons

In the vast span of geological time, a quarter century is a mere blink of an eye. Yet within that short period of time we have destroyed a tenth of the Earth’s wilderness. Quite a dubious achievement, that.

According to an international group of scientists who have mapped the planet’s surface for the remaining extent of “wilderness” (defined as “biologically and ecologically largely intact landscapes that are mostly free of human disturbance”), less than a fourth (23%) of the planet’s surface now qualifies as such. “[A] total of 30.1 million km2 (or 23.2% of terrestrial areas) of the world’s land area now remains as wilderness, with the majority located in North America, North Asia, North Africa, and the Australian continent,” explain the researchers, who published their findings in the journal Current Biology. 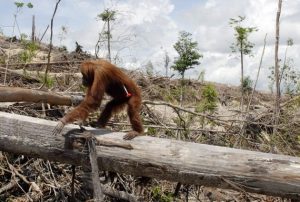 An forlorn orangutan clings to a felled tree trunk in a destroyed forest. Photo Credit: nus.edu.sg

Since the early 1990s some 3.3 million square kilometers has been lost, with most of that loss occurring in the Amazon region of South America  and Central Africa. If that sounds like a whole lot of land, that’s because it is. At this rate, the scientists warn, practically all wilderness will be gone within three generations or so. In all, around 30.1 million square kilometers of wilderness has been left, which covers less than a quarter of the planet’s total land mass.

“The amount of wilderness loss in just two decades is staggering and very saddening,” notes a member of the team, James Watson of the University of Queensland in Australia and the Wildlife Conservation Society in New York. “We need to recognize that wilderness is being dramatically lost and that without proactive global interventions we could lose the last jewels in nature’s crown,” he adds. “You cannot restore wilderness. Once it is gone, the ecological process that underpin these ecosystems are gone, and it never comes back to the state it was. The only option is to proactively protect what is left.”

In other words, there is no “Reset” button on Nature. Once an ecosystem has been destroyed, we can do little to bring it back from the dead. The obvious solution then is to preserve existing ecosystems in their natural state while we still have them. This, needless to say, applies to Malaysia, where once vibrant ecosystems and natural habitats with their unique kaleidoscope of species have been brought to the verge of collapse. Any more damage to them could prove catastrophic.