Artworks from Trash shine light on Green Causes in Sabah 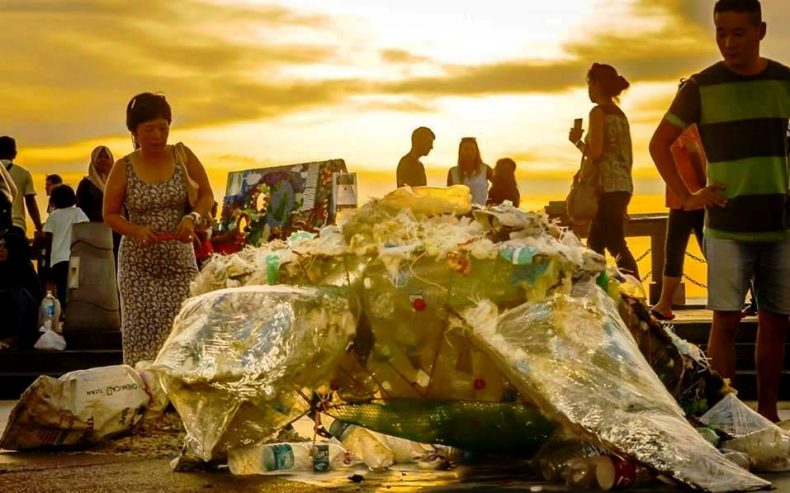 Passersby inspect an artwork created from trash and placed on display in Kota Kinabalu as part of a global awareness-raising environmental campaign. Photo Credit: Installation by the Bay at KK via Facebook

From waste to art. That’s what 61 individuals working in 14 teams pulled off in Kota Kinabalu by turning discarded items into giant artistic installations. Displaying their creations on the Segama Waterfront boardwalk, the local artists dazzled passersby with colorful artworks on a variety of inspired installations fashioned from waste.

In one piece of art, created by a team from Penang and called “Rescuing the Rhino,” the plight of Sumatran rhinos was highlighted in the vein of a scene from “Gulliver’s Travels.” Made from electric wires, used light bulbs and foam, the piece featured a giant rhino with its horn being tied down by numerous Lilliputian men. 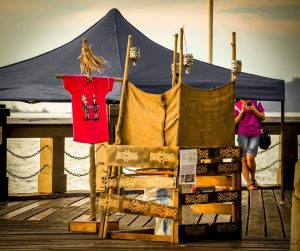 Another installation made from waste products on display at the event. Photo Credit: Installation by the Bay at KK via Facebook

“We are sending a message that rubbish can be turned into beautiful arts and also that rhinos are facing extinction because of man’s greed,” said Jason Min, one of the artists behind the artwork. “We wanted to show to the public the beast had come to extinction due to poaching activities with the hunters eyeing for its horn,” he added.  “It took us about a week to finish the work including coming up with the concept after our teacher had encouraged us to take part in this event.”

Another team had made good use of discarded bottles, which they filled with colored water (blue, green, yellow) for their piece “When Turtle Meets Plastic.” It served to highlight the large amounts of plastic waste that end up being dumped into seas, blighting the lives of marine animals. “This art highlights the issue where turtles are being threathened by plastic pollution, leading to the extinction of some of the species,” said artist Tressie Yap Chui Kie.

A team called Eco-Geek’s, whose members came from a private art gallery, in turn created an instillation called “Interlocked” using coat hangers and discarded CDs, which they proceeded to assemble on an icosahedron. The artwork “represents connectivity and dependency symbolic to our relations to and dependence on our environment,” the artists noted in a Facebook post. “The reflective surface of the CDs reminds us to look at ourselves as we are the source of the problems we are facing and we are also responsible for the solutions to our environmental issues.”

The event called Installation Art by the Bay at KK was organized by various governmental and non-governmental organizations in Sabah as part of the global Clean up the World Weekend, which is held on the third weekend in each September and seeks to promote cleanliness and environmental protection. Such eco-art initiatives can serve a useful purpose in highlighting environmental issues to members of the public, young and old, who might otherwise not have heard of them.