Rhinos are on the Brink 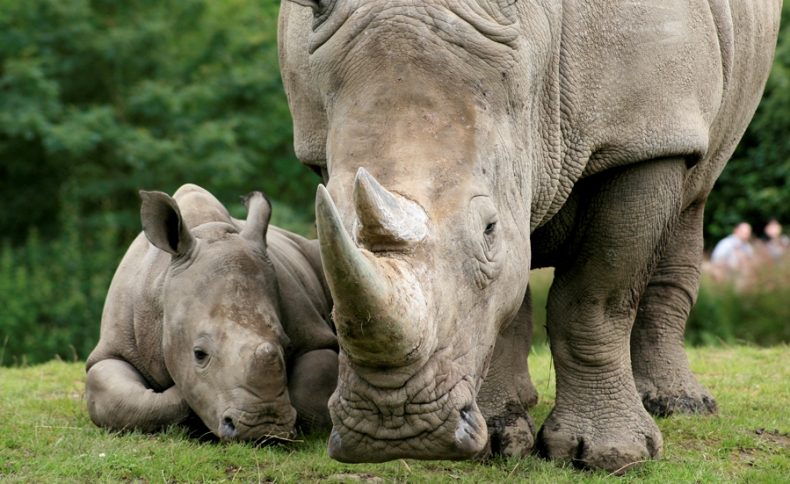 Wild rhinos have fallen on hard times in Asia and Africa. World Rhino Day serves to remind us just how hard those times are for these wonderful animals. Photo Credit: animalia-life.com

If you are a wild animal and you have an international day named after you, you’re in trouble. Rhinos are among those animals. World Rhino Day, on September 22, serves to celebrate these majestic animals, but it also serves to remind people that unless drastic steps are taken, several wild rhino species might go extinct within a matter of years.

A century ago some half a million rhinos roamed large swathes of Asia and Africa. Today fewer than a 10th – a mere 29,000 of them – remain. Three out of the five wild rhino species are critically endangered. Malaysia’s own Sumatran rhino is among them. The species, which is the world’s smallest rhino, has been declared extinct in the wild in Malaysia, but conservationists believe another 100 or so of them cling on in dense forests in neighboring Indonesia.

The animals have lost out to a combination of habitat destruction, illegal poaching and the difficulty of finding a mate for such a rare and solitary animal. The main culprit for the Sumatran rhino’s current status is deforestation, a problem faced by many other endangered species in Malaysia. Other rhino species have hardly fared better. Javan rhinos are even more endangered with only 50 individuals left in Indonesia’s Ujung Kulon National Park and none in the wild. 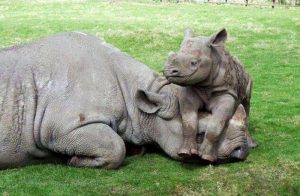 Poaching for their horns is the greatest threat facing African rhinos. West Black rhinos were declared extinct in 2011. According to the World Wide Fund for Nature, the number of Southern white rhinos poached in South Africa has increased by around 9,000% since 2007 as a result of unrelenting demand for their horns (which are simply protrusions of keratin, the same substance that forms your nails and hair) in traditional medicine in places like China and Vietnam.

Legal trophy hunting of rhinos in South Africa, notes WildAid, was infiltrated by Vietnamese organized crime. “Suddenly a large number of rhino horn ‘trophies’ were exported from South Africa to Vietnam and it appears that this was used to develop new markets in Vietnam, which are now being fed by horns from poaching,” the conservationist group explains. “In addition, increased Chinese economic activity in Africa contributed to an increase in the apprehension of Chinese smuggling rhino horn.”

Southern white rhinos, which live mainly in South Africa and are the second largest land animal in the world after elephants, have once been brought back from the brink already. In the 1960s, their number plummeted to a few dozen individuals. Today they number around 20,000, but they continue to be poached relentlessly. A record 1,342 rhinos were poached in Africa last year alone. A year before 1,215 of them were killed for their horns in South Africa, which surpassed the then-record of 1,004 from 2013. Many of the animals are safe from poachers only because they are kept in captivity and guarded with guns on so-called rhino farms.

On World Rhino Day delegates from 180 countries gathered in Johannesburg, South Africa, to try and work out solutions to this ongoing ecocide. “This crucial meeting of CITES Parties must be the rallying point for the international community to support and assist rhino range States in ending this global poaching crisis,” said Sabri Zain, the anti-trafficking watchdog TRAFFIC’s director of policy.

Among the measures suggested are harsher penalties for poachers and traffickers in Mozambique and Vietnam, two of the countries that are most heavily engaged in the rhino poaching crisis. As a major consumer of rhino horns, Vietnam “needs to step up its efforts to discourage the use of horn through targeted consumer behaviour change measures,” TRAFFIC notes. That is indeed the key: unless people stop buying rhino horns, several subspecies of the animals may die out in the wild entirely within a matter of years, which is an alarming  thought. 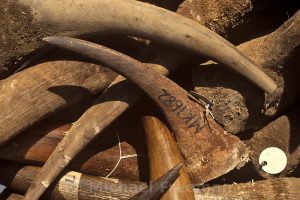 Thousands of white rhinos are killed ruthlessly for their horns, which are nothing but protrusions of keratin. Photo Credit: newsexaminer.net

Meanwhile, frantic efforts are under way to save Malaysia’s beloved Sumatran rhinos, known as the “singing rhinos” for their loud calls. Three individuals of the species, one male and two females, remain in captivity in Malaysia: the hopes are they can be used to boost the numbers of these wonderful creatures in a captive breeding program in Sabah, which has just been the subject of a National Geographic Channel documentary “Operation Sumatran Rhino.”

Once the animals roamed far and wide across in the rainforests and swamps of Indonesia, Malaysia, Thailand, Laos, Burma, Bhutan, China, India and Bangladesh. Today they survive only in a small area in Indonesia, thanks to their elusive ways and ability to disappear into their dense forest homes. In Malaysia and Indonesia, says Dr John Payne, who heads a captive breeding program for the beleaguered rhinos at a facility run by the Borneo Rhino Alliance (Bora) in Sabah, “[t]he palm oil sector has an ethical responsibility to shoulder a bigger role in conserving wildlife.” He adds: “Unfortunately, the government does not share that view, and tends to support the oil palm sector much more than nature conservation — that ought to change.”

To save the rhinos, Payne says, Malaysia and Indonesia will need to guard every single wild animal jealously in sanctuaries while seeking to boost their numbers in captivity for later release into the wild. “All rhinos now in the wild have to be brought into managed, fenced conditions so that fertile females and males can be in the same place as often as possible, bearing in mind females ovulate only about once per month,” he notes.

Once you get to know the animals, you can’t help falling in love with them, the expert says. Bora’s three rhinos (two females Puntong and Iman, and  male rhino called Kretam) all have unique personalities. Kretam, says the project’s field manager and veterinarian Dr Zainal Zainnudin, “is a gentle creature who comes back on time for breakfast and dinner” and handles himself like a true “gentleman.” Iman, meanwhile, Zainal explains, “is a princess that will take her own sweet time to come back for mealtimes — many times her keeper had to go and get her out of her mud wallow for breakfast.”

Killing such special animals for their horns is a crime against decency and nature. The slaughter must stop.