Two Tigers are ‘Killed Each Week’ 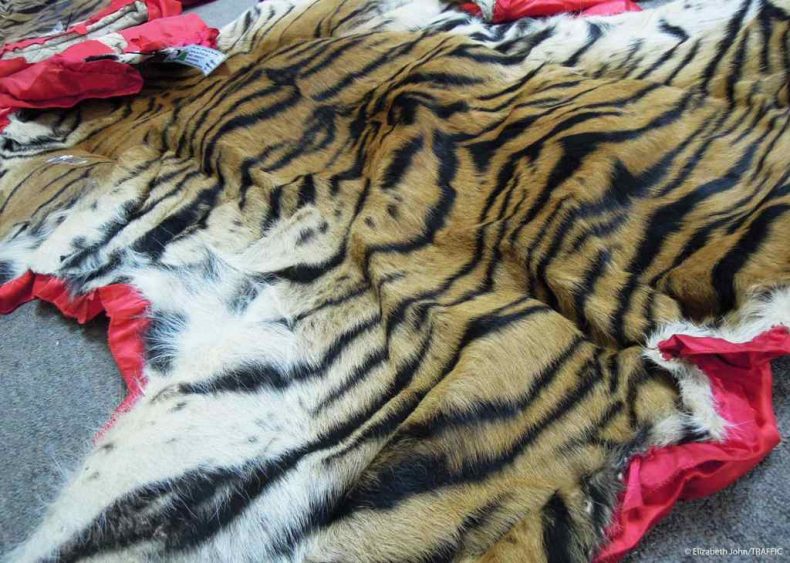 This tiger skin was amng a cachet of eight pelts seized by authorities in Malaysia in 2012. Photo by E. John/TRAFFIC

On average, two tigers are killed every single week for their parts, despite ongoing efforts to protect the critically endangered predators across their ranges in Asia. So say two leading conservationist groups, TRAFFIC and the World Wide Fund for Nature (WWF), in a joint report.

Based on data from the 801 seizures of tiger parts recorded in Asia between 2000 and 2015, the two NGOs estimate that a minimum of 1,755 tigers were killed for those parts. That translates into an average of more than two animals killed per week. Many of those tigers were likely captive animals kept at tiger farms. Yet animals in the wild remain at as much risk of being poached as ever, TRAFFIC and WWF say.

Despite their fearsome reputation, tigers are powerless against poachers. Photo Credit: Pixabay

There is also growing evidence that wildlife traffickers are still exploiting a smugglers’ route that stretches from Thailand to Vietnam via Laos. In all three countries the number of tiger farms has risen in recent years. “This analysis provides clear evidence that illegal trade in tigers, their parts and products, persists as an important conservation concern,” said Steven Broad, executive director of TRAFFIC. “Despite repeated government commitments to close down tiger farms in Asia, such facilities are flourishing and playing an increasing role in fuelling illegal trade.”

Conservationists are bringing increasing pressure to bear on governments to close down tiger farms, which routinely market themselves as centers for tiger conservation while in fact exploiting captive tigers as tourist attractions. In an especially notorious recent case, a Buddhist temple in central Thailand, where tourists could pose for pictures with tigers, was found to have sold the parts of several tigers on the black market. In Vietnam, too, several recent seizures of tiger parts have revealed a thriving black market. The government of Laos has pledged to shut down commercial tiger farms in the country.

“Criminal networks are increasingly trafficking captive bred tigers around Asia, undermining law enforcement efforts and helping to fuel demand. Tiger range countries must rapidly close their farms or wild tigers will face a future only as skin and bones,” said Ginette Hemley, a conservationist at WWF. “Laos and Thailand have announced steps in the right direction but they need to act now and other countries should swiftly follow the same path marked ‘close all tiger farms’.”

Those farms reduce tigers to languishing in captivity as tourist draws while they also pose a clear and present danger to conservation efforts by potentially aiding in the trafficking of tiger parts. TRAFFIC and WWF have called on countries with tiger ranges to share information and intelligence on incidences of tiger seizures and poaching for improved intelligence on trafficking networks. The two NGOs have also urged “commercial trading sites and social media enterprises to work closely with national governments to shut down businesses and individuals found to be facilitating the illegal trade in tigers (and other endangered species) online.”