Nations vow to Save Helmeted Hornbills 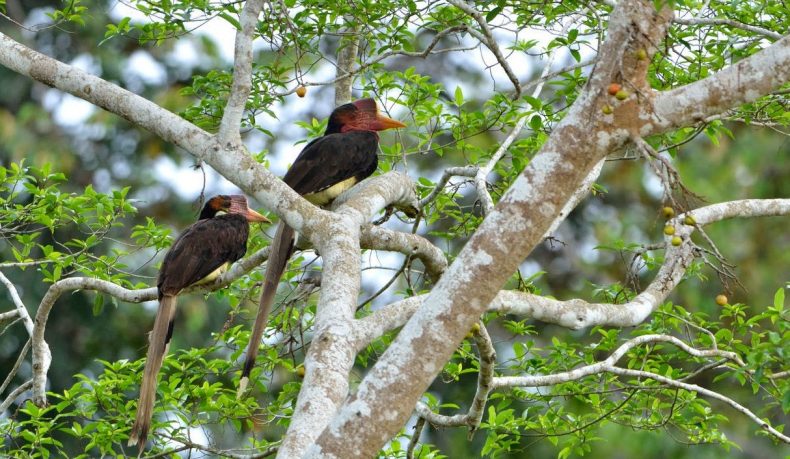 Helmeted hornbills need all the help they can get before time runs out on them. Photo Credit: Flickr

Unless we act, helmeted hornbills will go extinct in the wild. This isn’t a bit of alarmism; it’s a fact. The beautiful birds have been poached mercilessly across their range for their casques (helmet-like structures atop their beaks), which are highly prized as decorative items in China and Vietnam. In an encouraging development, however, participating nations at a CITES conference in Johannesburg have adopted  a resolution calling for “urgent and integrated conservation and law enforcement measures” to prevent the embattled birds from going extinct.

“This is a great victory for the helmeted hornbill that has been ruthlessly hunted for its red ivory as the elephant has been killed off for its ivory,”  Noviar Andayani, director of the Wildlife Conservation Society Indonesia Program, hailed the resolution. “Many have heard about the elephant ivory crisis and now it is time to hear more about the helmeted hornbill ivory crisis and take swift action to save it.”

Actions will speak louder than words, however, and what we will need is concerted and decisive actions against poachers and traffickers. Time is running out for the helmeted hornbill (Rhinoplax vigil), which is listed in CITES Appendix I and on the IUCN Red List of Threatened Species as “critically endangered.” The unrelenting demand for their casques, which have been dubbed “red ivory,” has led to rampant poaching of the birds. Recently a team of researchers has warned in a study, “Trade in the Helmeted Hornbill Rhinoplax vigil: the ‘ivory hornbill’,” that the birds are facing the imminent prospect of extinction in the wild.

“Between March 2012 and August 2014,” they wrote, “a minimum 2,170 heads and/or casques were seized from the illegal trade in Indonesia and China in identifiable enforcement actions. Seizures were made from poachers, smugglers, processing facilities and retailers (both physical shops and online traders).” At this rate, the birds will go extinct in the wild within a few years. “Efforts are therefore urgently needed to end this illegal trade, which is controlled by organised crime [syndicates] with interests in other wildlife products,” the researchers added.

Anecdotal evidence from locals in Malaysia has borne out such heartrending findings. Even as recently as the 1990s, the birds proliferated in the forest complex of Belum Temengor in Peninsular Malaysia, according to the headman of a local orang asli village. These days, he adds, they are nowhere to be found. The birds are threatened both by habitat loss and rampant poaching there and in nearby Borneo too. In August, Malaysian wildlife officials seized 200 wildlife parts, which included a helmeted hornbill casque and more than 45 hornbill beak tips. “A seizure like this has never before been made here and suggests that our Helmeted Hornbill species might also be targeted,” Kanitha Krishnasamy, senior programme manager of TRAFFIC in Southeast Asia, told the New Strait Times.

Time to act and act fast.