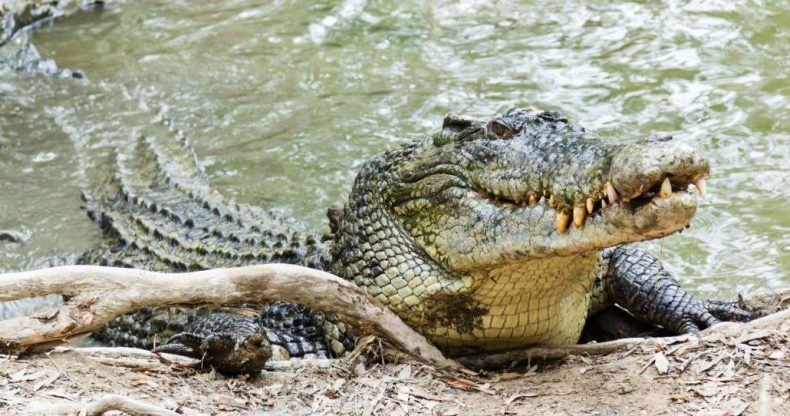 Saltwater crocodiles in Sarawak can now be culled and traded with some restrictions. Photo Credit: Wikimedia Commons

Saltwater crocodiles have enjoyed protection as an endangered species in Sarawak. As a result, they have come to thrive in the Bornean state’s waterways, often to the consternation of locals who have occasionally been attacked by the reptilian predators.

Wild populations of saltwater crocodiles in Sarawak have rebounded greatly over the past three decades as a result of successful conservation efforts that were launched in the early 1980s. The number of animals has more than doubled since 1985 in some areas with an estimated 13,500 individuals living in the state’s 40 rivers, according to official figures. That translates into 2.18 crocodiles for every 2 kilometers of river, or at least one crocodile for every kilometer of water.

The growth in wild crocodile populations has not gone unnoticed by locals. Only last month two attacks by crocodiles on people were reported in Sungai Samarahan. In one of the attacks a 38-year-old fisherman was likely killed by a crocodile. Many local villagers are now too scared to spend time near rivers. “I planted pineapples, rambutan and other fruits in my orchard but after the incident, I’m scared,” a local farmer told the Bernama news agency. 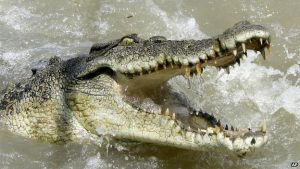 Nor are deadly crocodile attacks a recent development. The number of such attacks has been rising steadily for decades in tandem with the growing number of wild crocodiles. In the 1970s four people in Sarawak died in crocodile attacks. In the following decade the number of people who died surged to seven. In the 1990s, 11 people were killed in 20 recorded attacks. In the first decade of the new century 19 people died in 43 attacks. Since 2010 there have been 52 reported cases of human-crocodile conflicts, which claimed the lives of 27 people.

Things are about to get hairier for the rampaging reptiles, though. Faced with the growing numbers of wild crocodiles in Sarawak with more and more attacks on locals, Malaysian authorities last month petitioned the Convention on International Trade in Endangered Species of Wild Fauna and Flora (CITES) to allow regulated culling and trading in the state’s wild crocs. CITES, an international treaty aimed at wildlife conservation, has consented: It has downgraded the protection level of Sarawak’s saltwater crocodiles from its stringent Appendix I level to a more permissive Appendix II ranking.

That’s bad news for the reptiles. The animals are highly prized both for their skin and their meat in several countries in the region, and Malaysia is hoping to tap into some of that lucrative market by selling the parts of culled crocodiles. “There is demand for crocodile meat from countries like China, Thailand and Vietnam, while crocodile skin has a high economic value,” explained Natural Resources and Environment Minister Dr Wan Junaidi Tuanku Jaafar.

He added that the number of wild crocodiles “exceeds the numbers needed for conservation efforts.” The minister explained: “The (CITES) downlisting was approved on the grounds that it will benefit the rural people who depend on rivers as well as boost their economy. We [were] able to convince Cites because many of our beaches are no longer safe. Except for Damai Beach, our beaches are no longer safe.”

Here comes open season on Sarawak’s crocs then? Not so fast. “We will ensure that the harvesting is done in a sustainable manner,” Wan Junaidi stressed.

“There will be controlled culling and regulated trading, while at the same time, conservation efforts will continue. Most important of all, local communities will benefit from the culling exercise,” the minister elucidated. “Only those with licences can do the culling, and priority will be given to individuals from local communities. There will be export quotas for crocodile skin and meat to ensure controlled culling and to prevent rampant killing … we will look into and make a decision on the size of the crocodiles which can be culled.” 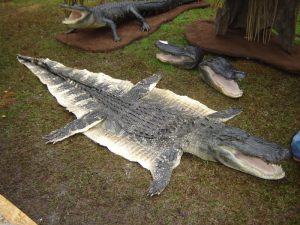 Crocodiles are highly prized for their skin and meat in some Asian countries. Photo Credit: Wikimedia Commons

State officials in Sarawak, too, have insisted that it won’t be open season on local saltwater crocodiles. “Like other animals listed in the same Appendix, any form of activity related to hunting, selling and killing of crocodiles will require permission from the Forest Department and the controller of National Parks and Wildlife,” said Sapuan Ahmad, director of Sarawak’s Forest Department.

Such prudence is both necessary and commendable. So is Sapaun’s call on locals to kill the reptiles only in self-defense or when they fear the animals pose a clear and present threat to people and livestock. “We will also continue to strengthen the work of culling especially in areas or rivers that have high population of crocodiles in order to create a more comfortable living environment, sufficient materials and food resources,” he said.

Local environmentalists, too, have warned against rampant revenge attacks or the wanton harvesting of crocodiles for their hides and meat. “Every kill must be reported with evidence” about why an animal had to be killed, stressed veteran environmentalist Prof Maketab Mohamed.

Stringent guidelines must be put in place to ensure that no more animals are killed than absolutely necessary. “The protocols and procedures must go hand-in-hand with awareness efforts among the local communities,”Maketab said.

Educational campaigns about the continued need to protect wild crocodiles in Sarawak, too, will be important. Crocodiles and humans can live side by side. It’s up to both locals and officials in Sarawak to ensure that they do so, to the benefit of both species and the detriment of neither.