The Dark Side of Mass Tourism 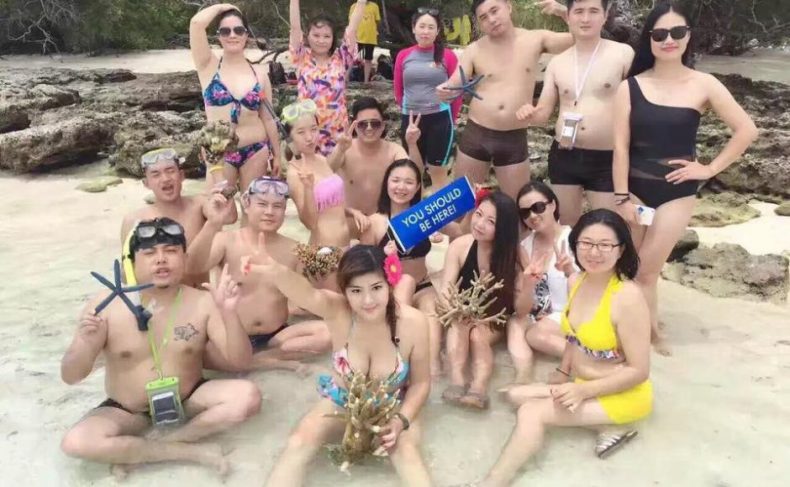 In a picture widely shared online, Chinese tourists pose for a photo on a beach in Sabah with bits of broken corals and starfish taken from the sea. Photo Credit: Facebook

The picture isn’t pretty. It shows a group of 16 Chinese tourists on a beach in Sabah posing for a cheerful photo with bits of broken corals and starfishes taken from the sea. One is holding a sign that reads “You should be here,” presumably as an invitation to other tourists.

The picture, which has been uploaded to social media, has enraged Malaysian nature lovers who accuse the foreign tourists of despoiling Sabah’s marine environment by wantonly taking bits and pieces of it. “Sea creatures should be respected. As ‘visitors’ in their habitat, we should not simply touch anything under the water, let alone take it out to pose with for pictures,” said one irate Malaysian. “Such behaviour would stress the starfish and even the corals, which might cause them to die.”

Another, who works as a diver in Sabah, concurred. “We are not supposed to touch corals as our hands are contaminated with bacteria, which can kill them, as they are very sensitive,” he noted. “We are supposed to protect them, and such behaviour could damage the ecosystem.”

Such behavior can indeed damage fragile ecosystems, like those at already stressed corals. Unfortunately, however, such behavior is all too common among Malaysians as well so we can hardly just blame Chinese tourists for such callous disregard of Nature. Locals in Sabah, for instance, are themselves notorious for befouling their state’s natural environments by wantonly littering on beaches, forest trails and pretty much everywhere else. Several educational campaigns against littering have been launched locally, but so far to little avail.

Nor is the practice limited to the Bornean state. Pahang’s famous mossy forest, in the Cameron Highlands, had to be closed to visitors for six months recently because many visitors kept on littering and trampling all over delicate plants underfoot while they strayed from designated paths. Many of those transgressors have been Malaysians.

Responsible tourism is vital if we are to preserve the country’s unique natural heritage. We can all lead by example when it comes to that. The natural wonders of Malaysia are the collective heritage not only of locals but of the entire world as well. There is no excuse for wantonly destroying parts of it for photo-ops or any other reason. Last year alone, Malaysia welcomed 25.7 million tourists. Mass tourism brings much-needed revenue to the county, but we must ensure that tourism does not come at the expense to the nation’s unique ecosystems.