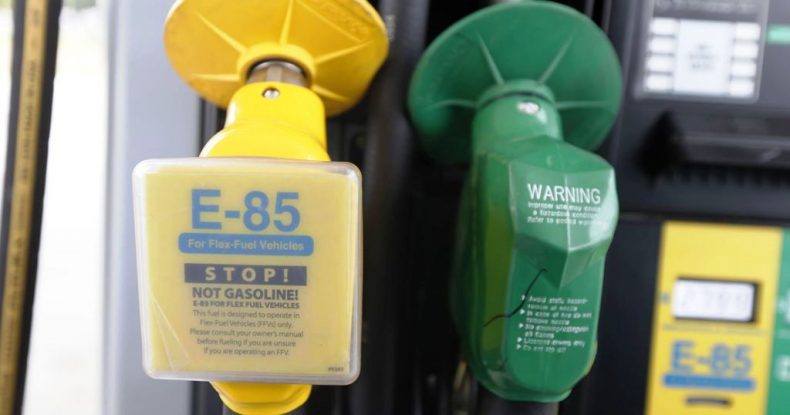 Ethanol can be used to power cars and generators. Now it can be gained with ease from CO2, thanks to an innovative technique. Photo Credit: Flickr

What with levels of carbon dioxide in the atmosphere having reached a tipping point, the planet’s climate is in for some rough times ahead. The scramble is now on to try and mitigate the effects of greenhouse gases with scientific means. And those efforts have now got a welcome shot in the arm.

Scientists at the US’s Department of Energy’s Oak Ridge National Laboratory (ORNL) in Oak Ridge, Tennessee, have devised an electrochemical process for turning carbon dioxide into ethanol, which can be used to power cars and generators.  A team of researchers did so by creating a nanotechnology-based catalyst from carbon, copper and nitrogen. They then applied a very modest amount of electricity (just 1.2 volts) to trigger a complex chemical reaction that serves to reverse the process of combustion, during which a solution of carbon dioxide dissolved in water turned into ethanol, with a yield of 63%.

Good news? Most certainly. Especially so because the scientists hit upon the process by accident. “We discovered somewhat by accident that this material worked,” explained Adam Rondinone, the lead author of the team’s study, which was published in ChemistrySelect. “We were trying to study the first step of a proposed reaction when we realized that the catalyst was doing the entire reaction on its own.” 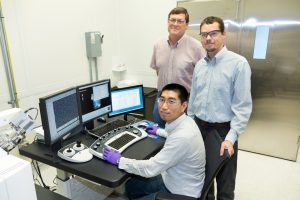 The scientists in their laboratory. Photo Credit: ORNL

He elucidated: “We’re taking carbon dioxide, a waste product of combustion, and we’re pushing that combustion reaction backwards with very high selectivity to a useful fuel. Ethanol was a surprise – it’s extremely difficult to go straight from carbon dioxide to ethanol with a single catalyst.”

Better yet: The technique of converting CO2 into ethanol (of which billions of gallons are used a year in the US alone) relies on low-cost materials and can be performed at room temperature in water. In other words, it could be scaled up to industrial-level production with relative ease. “The catalyst’s novelty lies in its nanoscale structure, consisting of copper nanoparticles embedded in carbon spikes,” the researchers explain. “This nano-texturing approach avoids the use of expensive or rare metals such as platinum that limit the economic viability of many catalysts.”

“A process like this would allow you to consume extra electricity when it’s available to make and store as ethanol,” Rondinone noted. “This could help to balance a grid supplied by intermittent renewable sources,” such as wind and solar power.

This is just one of several promising projects that scientists worldwide are working on in efforts to try and suck some of the vast quantities of CO2 out of the atmosphere and put it to good use. The proposed solutions range from converting atmospheric CO2 into methanol fuel to locking CO2 up in solid rocks buried underground.