Plankton Bloom in the Ocean is a sign of Climate Change 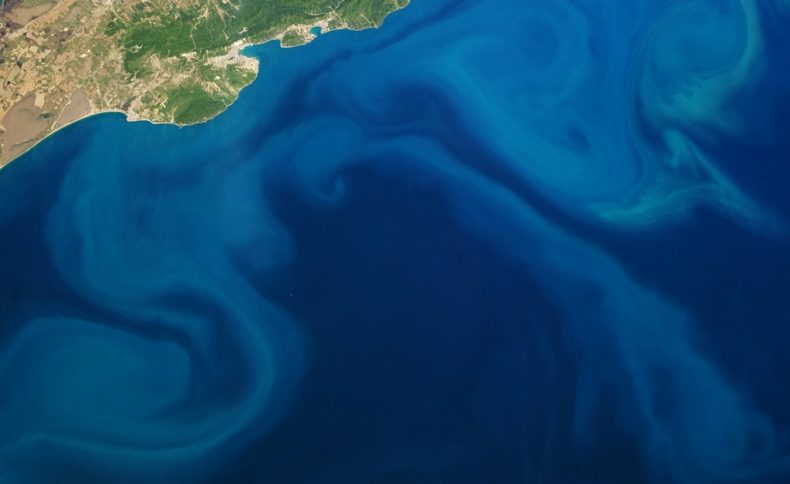 Plankton blooms can indicate that not all is well with the planet's oceans in a warming world. Photo Credit: NASA Earth Observatory

Here comes one of the latest signs of global warming: plankton blooms in the ocean. A large area on the surface of the sea east of New Zealand, say local scientists, has become covered in white algae known as coccolithophores.

Under favorable conditions, these algae begin to “bloom,” turning the ocean’s surface milky white with what is known as coccoliths. And those favorable conditions include warming surface water temperatures. The last time this happened was during a similar warming period 130,000 years ago.

These coccoliths end up being deposited on the ocean floor, where they come to form a kind of white mud. They are created by phytoplanktons (also known as microalgae), which play important ecological roles: in addition to serving as food for a variety of marine animals, they also help extract carbon dioxide from the atmosphere through photosynthesis. That they are thriving, however, is an indication that not all is well with the planet’s oceans.

Coccoliths can be used by scientists for monitoring the changing currents and surface temperatures of the oceans. “Our results show that during that last warm period, when the ocean was about one to two degrees warmer than present, sediments on the seabed were mainly made up of coccoliths,” said Bella Duncan, of Victoria University of Wellington, who contributed to a study on the phenomenon, published in the journal Global and Planetary Change.

The warming process that is fueling their abundance suggests that “the New Zealand ocean is currently responding the present phase of global warming. This is also a trend that has been increasingly observed in other parts of the world,” explained Prof. Lionel Carter from Victoria’s Antarctic Research Centre, who helped supervise the research project. “While the ramifications of this change on fish stocks, uptake of carbon dioxide and general ocean health have yet to be evaluated, it is clear that change is underway.”

That change also includes oceans becoming conduits of disease as a result of warming temperatures that allow pathogens and microorganisms to thrive and spread far and wide into waters that have previously been too inhospitably cold for them. That we are making the oceans sick is an alarming fact. We must do our best to try and heal them before it’s too late.