Teeing-off Python: A curious Snake drops by a Golf Tournament in KL 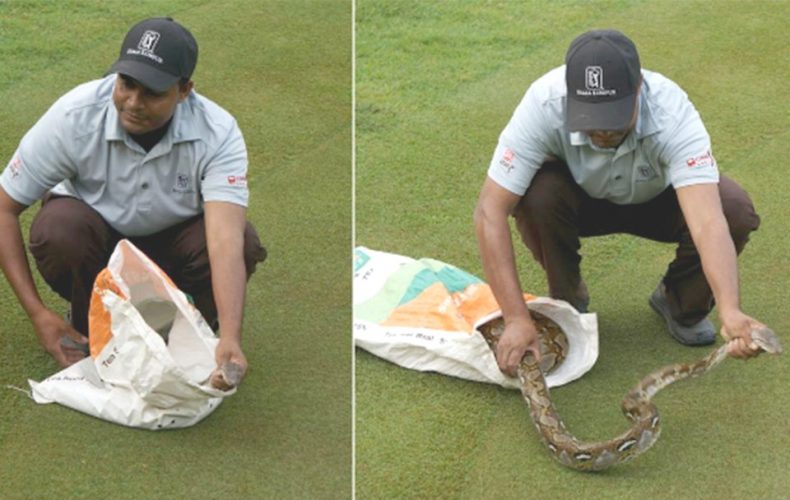 A Malaysian PGA Tour official bags a snake that has slithered onto the green at a major tournament in Kuala Lumpur. Photo Credit: PGA Tour via Twitter

A Malaysian python made headlines worldwide … by disrupting a major golf tournament. A six-foot-long python was spotted slithering across the green at the Klang Valley resort in Kuala Lumpur before the juvenile reptile was safely removed so the tournament could resume uninterrupted. The animal was then released unharmed at a safe distance from the golf course. 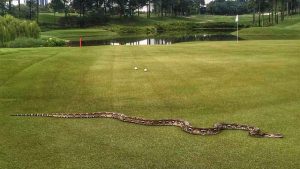 A six-foot snake takes a look-see near the 5th hole at the Klang Valley Resort. Photo Credit: PGA Tour via Twitter

“The club, which opened in 1991, has often had sightings of wildlife on the course – and golfers were again put off their stride by another sociable creature during day two of the 2016 CIMB Classic,” observed Britain’s Daily Mail. “PGA Tour officials were quick to spot the non-venomous intruder heading across one of the greens, with a well-trained snake handler swiftly onto the scene to place the python in a bag before relocating it to a more convenient habitat.”

What if, we wonder, the serpent simply wanted to get a bit of the action itself and tee off in style for a shot at the podium? That suspicion seems to have been shared by some of the contestants themselves: they fired off tongue-in-cheek tweets about the intrusive reptile. “There is a snake on the 5th hole,” announced the tournament’s organizers on their own Twitter page. “Say no more, fam.”

Joking aside, the presence of the animal could have been a bit of a blessing in disguise insofar as it gave the larger world a welcome glimpse into the fantastic ecological diversity of Malaysia. That rich biodiversity is justifiably famous worldwide. Too bad then that it is at risk of being further decimated by wanton pollution, nonstop development and other drawbacks of modernity.

As a result of their shrinking habitats, more and more animals (from monkeys to birds to reptiles) are forced into ever closer contact with humans, often at the risk of interspecies conflicts. That, sadly, is no laughing matter.