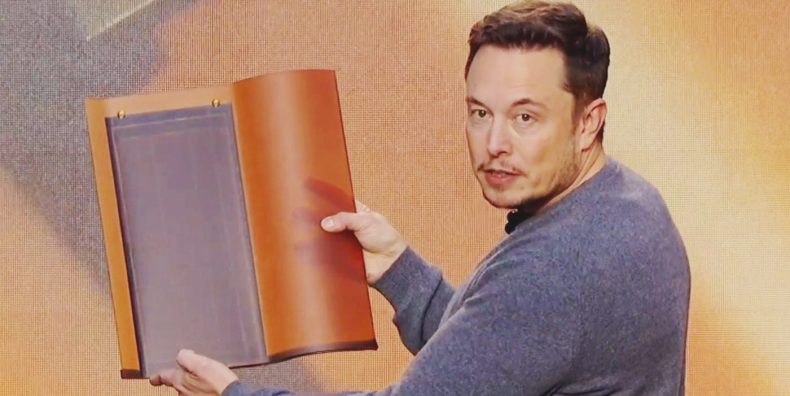 Big deal, you might say. Solar roofs have been around for quite some time, after all. Yes, but these roofs are solar roofs with a difference. Musk says his new solar-powered roofs come with fancy new tiles that obviate the need for traditional solar panels. They are connected to what his US-based clean energy company calls the Powerwall, a neat battery that can power a two-bedroom house for an entire day.

Better yet: his new-generation solar panels boast built-in features that make them both efficient and more visually pleasing than traditional tiles. Made of glass, the newly design titles are aesthetically appealing, unlike the rather bulky banks of solar panels currently in use. To make them even more attractive to homeowners in towns and suburbs, the tiles will come in four designs – textured glass, slate glass, Tuscan glass and smooth glass.

The company says that its new solar tiles could last for at least a half century and are at least 98% as efficient as their traditional, photovoltaic counterparts when it comes to harvesting sun rays. They can also defrost themselves in chilly weather, albeit that feature might not matter much in Malaysia, where temperatures always remains safely in warm-to-hot territory … and where those temperatures are set to rise further still as a result of global warming.

Tesla, Musk says, is working to integrate several cutting-edge technologies into a seamless new package, which would, among other things, allow people to charge their electric cars with renewable solar power right at home. “This is sort of the integrated future. An electric car, a Powerwall and a solar roof. The key is it needs to be beautiful, affordable and seamlessly integrated,” Musk explained.

Presumably, energy experts and policymakers in Malaysia are paying close attentions to the doings of Musk, whose electric car company is a world-leader in technological innovation. Malaysia is likewise positioning itself as a prospective leader in the manufacturing of photovoltaic technology. The future of clean energy is in technological innovation so any marked new progress in that is a welcome development.