Let us Save Malaysia’s last Dugongs 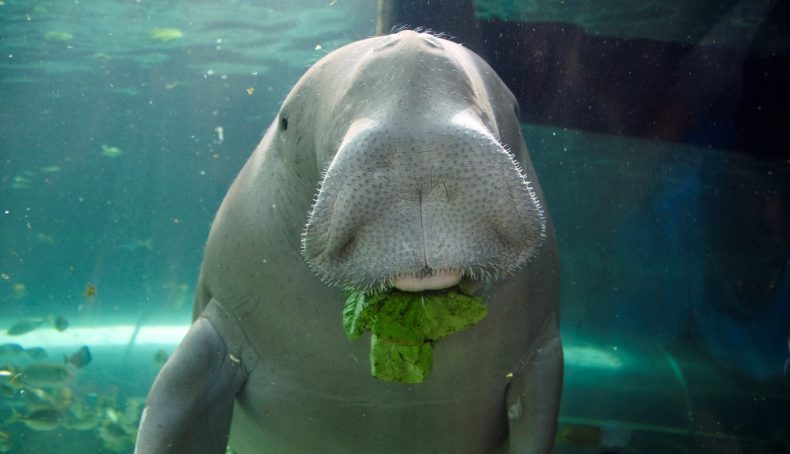 A dugong munches on a bit of seagrass. Photo Credit: Flickr

Among Malaysia’s least-known residents is a species of shy marine mammals. They look remarkably like seals and are almost as elusive as the mythical mermaids that people used to mistake them for. We’re talking of dugongs, of course.

Dugongs are among the rarest wild creatures in the country with a mere 100 of them left, in all, in the waters of Johor, Sabah and Sarawak. Worse: Each year several dugongs perish from preventable causes; namely, human interference and negligence. A leading cause of dugong deaths is fishing nets in which the mammals may get entangled until they drown, according to a conservationist. As a mother dugong stays inseparable from her calf, nets can pose a danger to both. 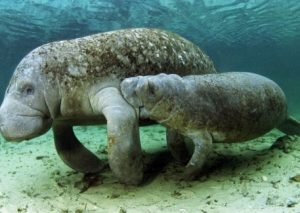 A dugong mother with her calf. Photo Credit: www.chunpage.ne

Several other dugongs are known to have died after getting caught in the propellers of ships. Their bad eyesight further exposes these placid creatures to such dangers. They use whistles, growls and other sounds to communicate with one another. It is because of these their vocalization and aquatic lifestyle that dugongs may have served as the inspiration for ancient tales of mermaids and sirens.

They are slow-moving animals with the fluke-like tails of dolphins and possess few defenses against predators like saltwater crocodiles and sharks. That, too, exposes them to potential harm.

Known as “sea cows,” dugongs are evolutionary relatives of manatees and can be found here and there, in small numbers, from East Africa all the way to Australia. They are also distant relatives of elephants, and like them they are herbivorous. Day and night dugongs graze on underwater beds of seagrass, often in shallow waters, rooting for seagrass with their sensitive snouts. They can stay underwater for up to six minutes at a time. Occasionally they breath by rising up on their tail in shallow water, as if they were “standing,” and keep their heads above water.

Sadly, their feeding habits, too, can expose them to dangers like that of getting caught accidentally in fishing nets. They are also at increasing risk because of the usual causes that affect a large variety of wildlife, both in water and on land: habitat loss, pollution and the diminishing of food sources.

As elsewhere around the world, the Malaysian population of the animals has dropped alarmingly. A half century ago there were several hundred dugongs in Malaysia’s waters; today a fraction of that number remains.

It didn’t help that in the past local orang asli communities actively hunted dugongs in order to feast on their meat, which they considered a tasty delicacy. Local traditions also attributed magical and curative properties to the “tears” and certain body parts of the marine mammals, like their bones. “Some people have even offered financial rewards to fishermen in the village if they manage to catch a dugong alive,” a local resident in Gelang Patah, in Johor, recently explained in a newspaper interview.

Another local added: “It was once common for fishermen to spot dugongs grazing on the seabed during low tide but now it has become a rare sighting.” Sadly, these days locals tend to have sightings of dugongs only after the animals have died and their corpses show up floating in the water, so rare have dugongs become in an area where they once thrived.

That should give us pause. We’ve driven to the brink of extinction an animal that we hardly even realize continues to exist away from prying eyes in marine pockets here and there around the country. 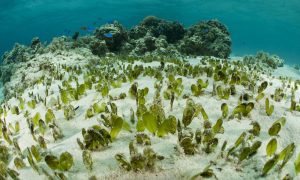 Seagrass beds like this one serve as inviting pastures for dugongs. Photo Credit: WWF

Frantic conservation efforts are under way to save those that are left. Focusing on two key sites, at Sibu and Tinggi islands as well as the waters of Lawas in Sarawak, the Malaysia Dugong and Seagrass Conservation Project has been closely monitoring resident populations of the shy creatures.

But to save the dugongs, we also need to save their habitat and primary food source: seagrass. A fully grown dugong can consume as much as 40kg of seagrass in a single day and to find that much grass they need to have ample roaming space where they are left undisturbed. “Dugongs are usually found in shallow waters, near seagrass beds,” notes Ismail Abu Hassan, director-general of the Fisheries Department. “If there is no more seagrass left, there will be no more dugongs.”

No more dugongs in the waters of Malaysia. That’s an awful thought. But it isn’t too late yet. We can still save them.