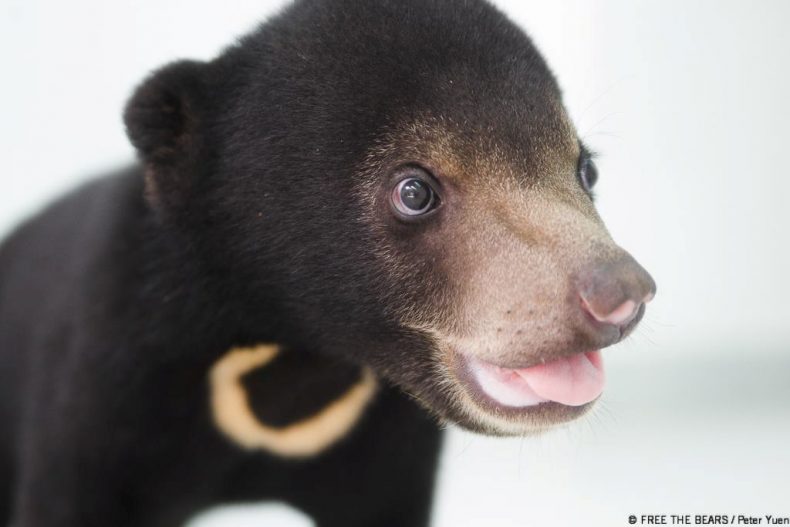 Sun bear cubs remain at threat from poachers and traffickers in Malaysia and elsewhere in the region. Photo Credit: Free the Bears

Another day, another development involving one of Malaysia’s perennially beleaguered sun bears. Thankfully, though, this one was a welcome one.

Wildlife Department officials in Sabah captured a one-year-old runaway sun bear cub that escaped from her owner in Kg Pangkalan Abai. The young bear, a female, is now safe and sound at the Lok Kawi Wildlife Park. “A team was dispatched to locate the bear on Saturday morning and after much effort the sun bear was finally recaptured by darting it with tranquilizer,” explained  the department’s director, Augustine Tuuga.

The cub’s owner, he added, had been keeping the animal in a metal cage in his backyard for over a year, meaning that the long-suffering little bear had been forced to spend all her life so far in a cage. Malayan sun bears are totally protected under the Wildlife Conservation Act 2010, which prescribes a penalty of up to MR200,000 or a jail term of up to 10 years, or both, for trafficking juvenile bears. In other words, keeping them as pets is an illegal act that carries a hefty penalty, yet some people keep trying their luck, for shame. 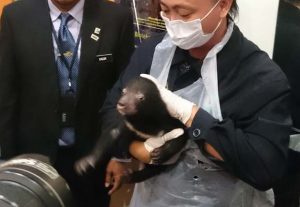 A one-month-old bear cub is handled after being saved from the illegal wildlife trade in Malaysia. Photo Credit: TRAFFIC

This incident has come right on the heels of another incident in which a wildlife seller was arrested in Kuala Lipis in Pahang for seeking to sell a one-month-old bear cub online. “He posted an advertisement on his Facebook [page] looking to sell the sun bear,” explained Abdul Kadir Abu Hashim, director-general of Perhilitan. Luckily, the man was stopped before he could sell the cub, which was later identified as an Asiatic moon bear cub from outside of Malaysia, not a sun bear from here.

These two recent incidents have brought fresh new light on the plight of sun bears and that of their cousins, Asiatic black bears, also known as “moon bears.” The two species, whose numbers have dropped sharply over the past decades in forests, continue to face a variety of threats throughout their range in Southeast Asia.

Sun bears and Asiatic black bears are both highly sought on the illegal wildlife market for their body parts, like their teeth, bladders and and claws, to which practitioners of traditional medicine attribute curative powers. They are also hunted regularly for their paws, which are used as ingredients in a delicacy called bear paw soup in countries like Cambodia and Vietnam.

“It’s clear that poachers, traders and consumers have their target firmly set on Asia’s bears. Arrests such as the one made by Perhilitan sends a strong message that such crime will not be tolerated,’’ said Chris R. Shepherd, regional director in Southeast Asia for the anti-trafficking watchdog TRAFFIC. “TRAFFIC’s research has consistently shown a demand for Asiatic Black Bears and Sun Bears (Helarctos malayanus) and their parts in the region. A 2011 report found evidence of widespread illegal sourcing and trade in wild bears in 13 countries and territories in Asia,” the conservationist group observed.

“We’re very encouraged by the greater enforcement vigilance we’ve seen in Malaysia and elsewhere in the region,” Shepherd elucidated. “What needs to happen now is for strong penalties to be meted out to convicted traffickers, which can serve as a deterrent. Without this, the dedicated effort of law enforcement agencies becomes less meaningful.”