Scrambling to Save Malaysia’s Wildlife

A wild tiger is captured on a camera trap. Photo Credit:WWF

In its newly released Living Planet Report 2016, the World Wide Fund for Nature (WWF) has painted an alarming picture of the impending prospects of the planet’s wildlife. Unless we change course, the numbers of wild animals will have declined by a staggering 67% by the year 2020, a mere four years from now, compared to levels just 50 years ago. 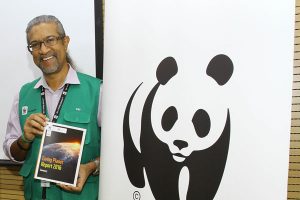 Now the Malaysian chapter of the international conservationist group has a message for the country’s citizens, and it’s one that is equally alarming: Malaysia’s wildlife is hardly immune from this trend of mass wildlife extinction. In fact, in some ways the country is a poster boy for the wanton destruction of wildlife.

Take Malaysia’s iconic tigers. “While the global tiger population has slightly increased to 3,900, the Malayan tiger population estimate has declined to as low as 250. On June 23, 2015, it was moved from the Endangered to Critically Endangered species in the IUCN Red List of Threatened Species,” WWF-Malaysia’s executive director and CEO Dionysius Sharma notes.

“Our national icon, the Malayan tiger, has been pushed to the brink of extinction by poaching, habitat loss, forest degradation and fragmentation,” he explains. “We need to combine our efforts at full force to double the number of tigers in the wild. By conserving tigers in their natural habitat, we are actually saving the entire ecosystem where the tigers live which is crucial for our own survival.”

This simple yet poignant insight bears repeating again and again. We can’t save tigers, or any other endangered species, in isolation. We’ll need to save their entire habitats, or what’s left of them, with their entire ecosystems. Failing that, we’ll likely end up with a handful of wild tigers for show in patches of forest here and there, but nothing approaching a viable population.

In fact, that is almost already the case. Over the past decades, wild tigers have been driven ever further into shrinking habitats while their populations have plummeted as a result of deforestation and rampant poaching. A mere 50 years ago, several thousand Malayan tigers roamed the country’s forests. Today only a mere 350 of them are left, at best. Losing even a few more could be catastrophic. Yet this year alone at least eight wild tigers are known to have died, the last one apparently poached by orang asli youth in Pahang. 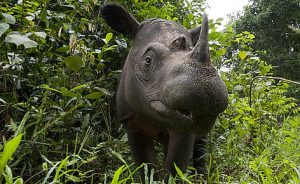 The plight of Sumatran rhinos, which went extinct in the wild last year in Malaysia, should serve as a warning to as about the impending prospects of several other critically endangered species. Photo Credit: WWF

Last year, in a development that horrified conservationists and animal lovers alike, Sumatran rhinos went extinct altogether in the wild in Malaysia. A mere three of them remain in captivity with frantic efforts underway to try and increase the animals’ numbers through a captive breeding program. It remains highly questionable how well such artificial breeding programs can bring species back from the brink of extinction. Commendable as they are, they are desperate rearguard actions that may be doomed to failure. What we must do is ensure that no critically endangered species gets to the point where all is left for us is to try and bring them back from the dead.

But not all is gloom and doom. Progress has also been made in saving and protecting several endangered species. Sea turtle conservation is a case in point. “Positive developments have been observed at several nesting beaches across Malaysia,” Sharma notes. “In Terengganu, more Green turtle eggs are secured for incubation with intensified patrolling during the annual nesting season, with more than 40 per cent increase in nestings recorded in the last 25 years. In Semporna, Sabah, 78 Green turtle nests and 26 Hawksbill turtle nests are recorded and secured for incubation in 2016.”

We’ll need plenty more success stories like these in years to come if we do not want to see an end to Malaysia’s stunning biodiversity, which is one of the country’s greatest assets.