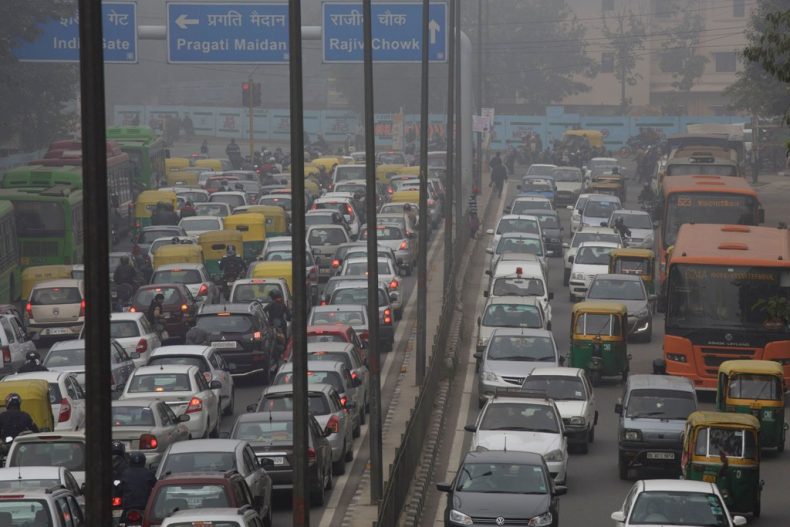 If you want to see an example of what rampant air pollution can do, take a look at New Delhi. Air pollution in India’s capital has reached levels that are over 16 times the normal limit, forcing the country’s government to declare a national emergency.

The situation has got so bad that schools around the sprawling city had to be shut down, while numerous offices, too, stopped working. Spending any time outdoors became an excruciating experience for many of Delhi’s 20 million residents. Simply opening a window could prove a health hazard. “Pollution has increased to an extent that outdoors in Delhi are resembling a gas chamber,” said Delhi’s chief minister, Arvind Kejriwal.

The blazing tropical sun became a mere pale white circle in the sky behind a thick curtain of haze. “The smog is acrid, eye-stinging and throat-burning, and so thick that it is being blamed for a 70-vehicle pileup north of the city,” a news report in The New York Times explained.

In fact, the city’s air pollution is so bad that it is visible from space, NASA has confirmed by help of satellite images. Down on the ground, millions of people ended up facing the prospects of a severe public health crisis. “Levels of the most dangerous particles, called PM2.5, reached 700 micrograms per cubic meter on Monday, and over the weekend they soared in some places to 1,000, or more than 16 times the limit India’s government considers safe,” the US newspaper added. 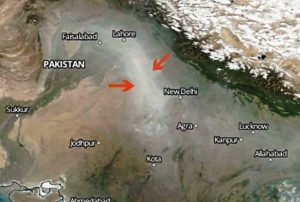 Smog over India’s capital has become so bad that it is clearly visible from space. Photo Credit: NASA

Being exposed for longer periods to such high concentrations of PM2.5 equals smoking two packs of cigarettes, or more, a day. That’s because at the the level of PM2.5, pollutants can penetrate into the lungs and enter the blood stream, causing a variety of debilitating ailments from pulmonary ones to brain-related ones.

New Delhi is one of the world’s most polluted cities and has long been beset by extremely bad air quality with record levels of pollutants. Many residents in Malaysia can certainly sympathize with the plight of locals in Delhi. The periodic annual haze from burning forests in neighboring Indonesia covers large areas of Malaysia in thick, acrid smoke. Large numbers of people succumb to respiratory ailments brought on by the severe drop in air quality each year and some experts believe that thousands of Malaysians die of health complications from it.

The severe smog in Delhi has likewise been caused largely by open burning. Farmers in the north of the country often engage in burning dry straw left over from their rice harvests as they get their paddies ready for planting new crops in the winter. They have been burning as much as 32 million tons of straw at one go this time, thereby triggering a massive environmental disaster.

What lessons can we draw from Delhi’s environmental calamity? One lesson that we surely can is this: at the rate we are poisoning our environment (its air, its water, its soil), major metropolises may soon become almost uninhabitable. They will turn into places where you reside at your own risk.

In two of the world’s most populous countries, India and China, air pollution is a perennial blight on the lives of residents in practically all larger urban areas, especially those with significant industrial development. India’s and China’s metropolises, including their capitals, Delhi and Beijing, routinely land on Top 10 lists of the world’s most polluted cities, like a recent one compiled by the World Economic Forum. The culprits are the usual environmental factors: overpopulation, unsustainable growth, poor management of natural resources, helter-skelter development, a lack of urban planning.

To one degree or another, Malaysia’s larger cities, too, are grappling with similar problems. Thankfully, they are nowhere near the level of New Delhi’s air pollution at the best of times, but let the Indian capital’s plight be a warning to us.