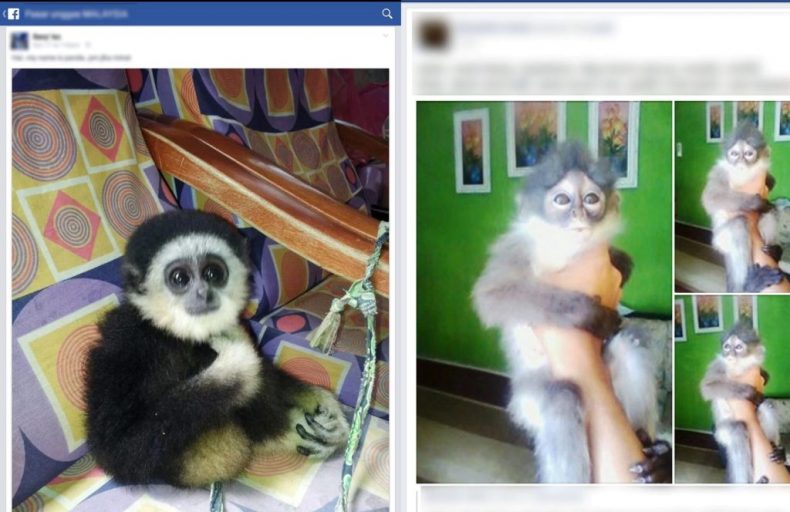 Juvenile primates are offered for sale in a Malaysian Facebook group. The social media platform has become a hub of wildlife trafficking from Malaysia to Vietnam. Photo Credit: Facebook

Recently the international anti-wildlife trafficking organization TRAFFIC revealed that Facebook, the hugely popular social media platform, has become a hot bed in Malaysia for the illegal trade of protected species as part of a booming exotic pet trade conducted online. After a five-month investigation, TRAFFIC’s researchers discovered that more than a dozen Facebook groups in Peninsular Malaysia alone were dedicated to buying and selling hundreds of protected species from Malayan sun bears to gibbons and binturongs.

Now here comes another report by another leading environmentalist group that confirms that social media platforms like Facebook are widely used for such sales not only in Malaysia but elsewhere in the region as well. Disheartening? Certainly. So brace yourself: 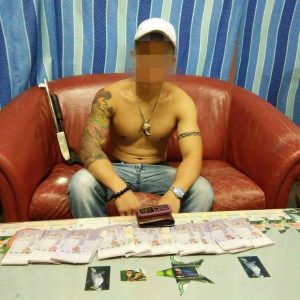 A Vietnamese trader poses for a picture with the money he has made from selling parts from endangered animals. Photo Credit: Wildlife Justice Commission

Wildlife smugglers operating in a small town in Vietnam are so brazen that they use Facebook to sell large quantities of illegally obtained elephant tusks, rhino horns, pangolin scales and tiger parts. During an 18-month undercover investigation, experts working with the Wildlife Justice Commission (WJC), a global organization of environmental crime experts, managed to infiltrate smuggling groups in a Vietnamese town of Nhi Khe, a hub of illegal wildlife trafficking near Hanoi.

The investigators found that last year alone 51 traders operating in the town sold a staggering $53.1 million’s worth of rhino horn, elephant ivory, tiger parts as well as parts from protected species like pangolins. The traffickers conducted much of their illicit trade online, including the sale of whole elephant tusks and “medicinal” paste made from ground-up tiger bones.

WJC’s investigators found that the illegally traded animal parts on sale came from as many as 907 dead elephants, 579 dead rhinos and 225 dead tigers. “It’s wildlife trafficking on an industrial scale,” Olivia Swaak-Goldman, WJC’s executive director, commented. And this, she added, is just “the tip of the iceberg.”

The Vietnamese traffickers attract prospective buyers to their closed Facebook groups, where they then proceed to auction off illicit parts from elephants, tigers, rhinos and other animals. They also use instant messaging apps like WeChat to communicate with their buyers. By doing so, they are able to reach a large pool of buyers and keep in touch with them with ease. “Social media provides a shopfront to the world” for illegal traffickers, Swaak-Goldman noted.

The nonprofit’s investigators have asked Facebook to help roll back the blatant trade on the site, to which Facebook has responded that it “does not allow the sale and trade of endangered animals.” The social media giant promised to pull down any pages by its users found to be engaged in wildlife trafficking. The WJC also presented its findings at a public hearing at the Peace Palace in the Hague, Netherlands, to raise the alarm about the extent of online trafficking.