Sea turtles in Melaka are Losing out to Hotels, Condominiums and Malls 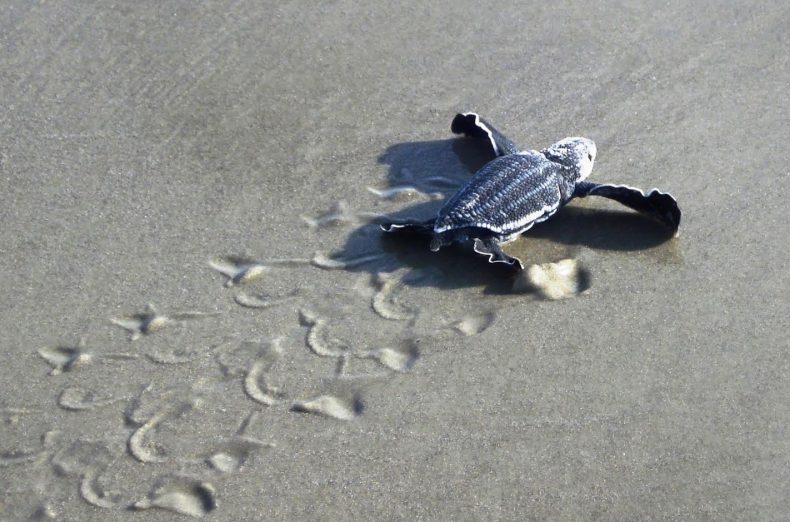 Sea turtles in Melaka are losing out to a usual suspect: relentless coastal land reclamation. Sandy dunes and beaches are being bulldozed and razed to make way for new luxury hotels, upscale condominiums and flashy beachside shopping malls, leaving turtles with precious little space in which to lay their eggs.

“Over the past 20 years, reclamation has gobbled up swaths of ocean along Malaysia’s western coast, creating a man-made landscape of homes, offices, deep sea ports and cruise ship terminals,” explains the online conservationist journal Mongabay. “The state of Melaka, with its historic city overlooking the Strait of Malacca, began reclamation in 1974, but the process has gathered pace over the past two decades and a slew of recent projects have deepened concern about the environmental cost.”

That cost has been considerable for the area’s turtles. The number of turtle landings has declined from 481 in 2013 to just 367 landings this year. Last year the number of landings stood at 418 and the year before it was 436. In Pulau Upeh, a island, popular with tourists, which was once the largest nesting ground for hawksbill turtles in Peninsular Malaysia, the number of turtle landings has dropped from 111 in 2011 to a mere 13 so far this year. This drastic drop has alarmed conservationists.

In addition to shrinking beaches gobbled up by development, light pollution and nighttime noise have been two other factors that have forced the placid reptiles to stay away from long stretches of beach. In an effort to reverse the trend, the state’s government is planning to set up a turtle sanctuary along an 800m beach between Padang Kemunting and Air Hitam Darat and forbid all night activities in the area that has been frequented by sea turtles.

Several conservationist groups have been running grassroots initiatives in Melaka and elsewhere across Malaysia to protect hatching sites from poachers and to help hatch eggs artificially. Several of these projects have been successful in keeping local sea turtle populations steady in their numbers. However, the threat of coastal development and other harmful activities continue to take their toll on beleaguered sea turtles.

“Much of the coastline in Melaka has (already) been transformed into an urban landscape with more beaches becoming unsuitable for nesting,” Lau Min Min, head of WWF-Malaysia’s Melaka hawksbill turtle conservation project, told Mongabay. “Protecting the remaining prime nesting beaches is urgent and vital.”