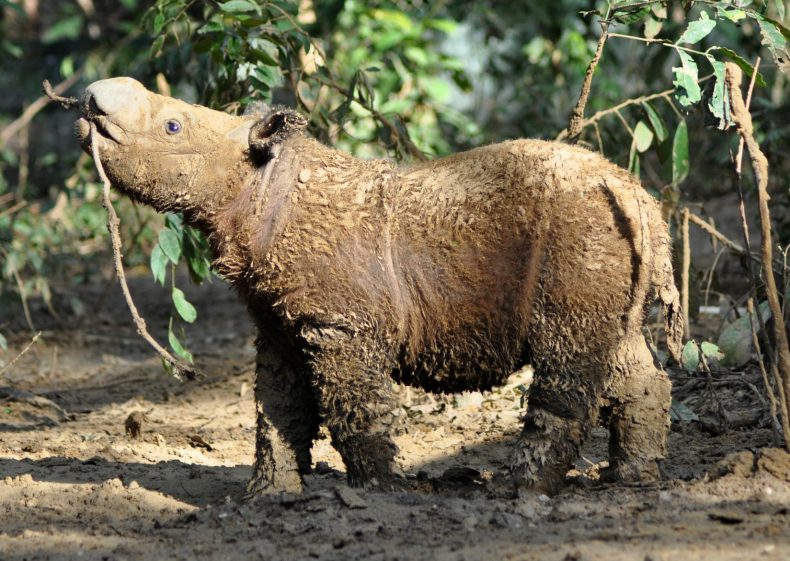 Last year, in a development that shocked animal lovers, Sumatran rhinos were officially declared extinct in Malaysia. Yet, judging from a footprint that has just been spotted in Sabah’s Danum Valley Conservation Area, a few last specimens of the gentle beasts might still be hiding out in local forests.

During a recent biodiversity survey of the area, members of WWF-Malaysia’s Sabah Terrestrial Conservation Programme came across a 23cm-wide footprint, which at first they took to be that of a baby elephant. Seeing as there were no young elephants roaming anywhere in the area, however, they began to speculate that the footprint might instead have belonged to a rhino.

“There were no signs of an accompanying mother elephant or elephant dung anywhere. Taking all these into consideration, it strengthens our hope that this could be the footprint of a rhino,” the program’s manager, Sharon Koh Pei Hui, said at a press conference. “But we did not see the animal itself so we cannot confirm it,” she cautioned.

A single footprint that may or may not have belonged to a wild rhinoceros is hardly cause for undue optimism. Nonetheless, it does raise the possibility that one or more rhinos could perhaps have survived in the forests of Sabah. “We might have a ghost population where they suddenly appear after not being detected for a long time,” Koh explained. She and her colleagues are planning to return to the area for further research and investigation.

Sumatran rhinos, the smallest of living rhinos in the world, are elusive creatures that prefer to hide out in thick vegetation. No live rhino has been spotted in Sabah since 2011, which has led conservationists to conclude that the animals have likely been driven extinct in the Bornean state. The animals’ numbers have plummeted over the past decades as a result of habitat loss and rampant poaching. Around 100 of them continue to cling on to life in neighboring Indonesia, while frantic efforts are under way in Sabah to artificially breed three captive animals (one male and two females) in the hopes of boosting the animals’ number and perhaps returning them one day to the wild in Malaysia.

The conservationist group Borneo Rhino Alliance (BORA) remains skeptical about the new footprint, insisting that the likelihood of some wild rhinos still roaming Sabah’s forests are “close to zero.” Even if a few last wild rhinos have somehow managed to survive in the Danum Valley, their prospects of long-term survival may be bleak. The footprint was found outside the “safe zone” in the Danum Valley Conservation Area with signs of human encroachment and possibly poaching nearby.