‘Extinct’ Antelopes return to the Wild 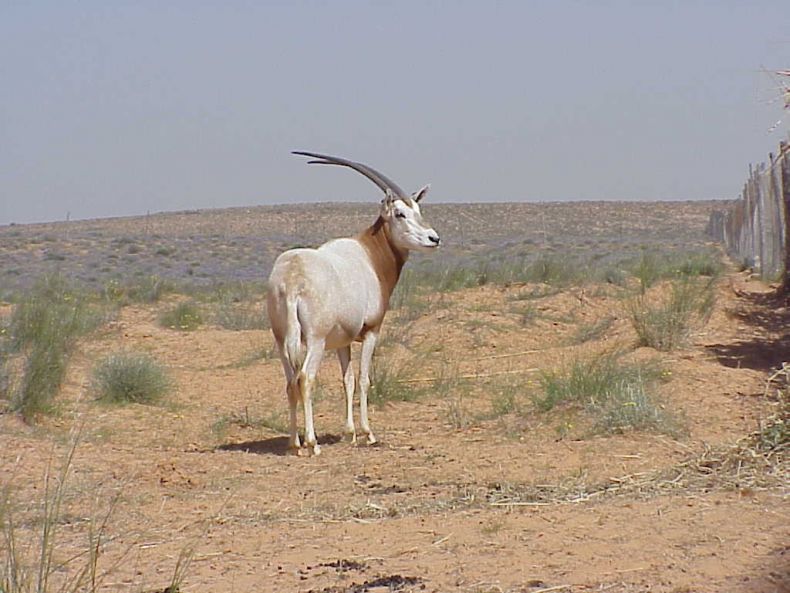 The scimitar-horned oryx went extinct in the wild some 20 years ago. Now it's back. Photo Credit: Marwell Zoo

Animals that go extinct in the wild rarely get a second chance at returning to their former habitats. Sometimes they do, though.

The scimitar-horned oryx has done. The desert antelope was declared extinct in the 1990s in its habitats across North Africa within the Sahara. But now members of the species are back, scampering about in pockets of the Sahara, as if they’d never been gone at all.

Captive breeding populations of the antelope, famed for its elongated curved horns that resemble scimitars, were kept safe from harm in several countries from the United States to the United Arab Emirates and Australia. Then last August 23 individuals were reintroduced to the Ouadi Rimé-Ouadi Achim Faunal Reserve, in a remote part of the African nation of Chad. The idea was to see how well they would fare in the wild. They have fared quite well, much to the relief of conservationists who are now releasing another 23 antelopes from captivity so they could join the ones already in the wild.

Some of the animals have even started breeding in the wild and last September the first wild scimitar-horned oryx calf was born since the species was driven extinct. Other females, too, are now ready to give birth to other calves soon in an encouraging sign that the species might be able to bounce back in the wild. “So far, the animals look exceptionally healthy,” said Jared Stabach, a researcher at the Smithsonian’s National Zoo and Conservation Biology Institute in Washington DC. “They seem to be adapting to the environment really well.”

They are helped in that by their herbivorous ways, which means that they don’t have to learn to hunt for food. It also helps that their natural predators, including cheetahs and lions, have themselves gone extinct in the area, New Scientist magazine explains. Locals are reported to be enthusiastic about the return of the antelopes, which were hunted into extinction in the area some two decades ago.

In a world where species are going extinct at record rates, such conservationist success stories are like rays of sunshine. “Conservation scientists are all giving big thumbs up and cheering over this,” Carolyn Hogg, from the University of Sydney, in Australia, told the magazine. “Animals are often bred in captivity in zoos with the view of releasing them back into the wild, but then there are always lots of challenges. It’s pretty amazing to know that you can put them back.”

It’s amazing, yes. That said, we should make sure not to drive species extinct in the first place, rather than hoping that if we do, we will somehow be able to reintroduce them later.