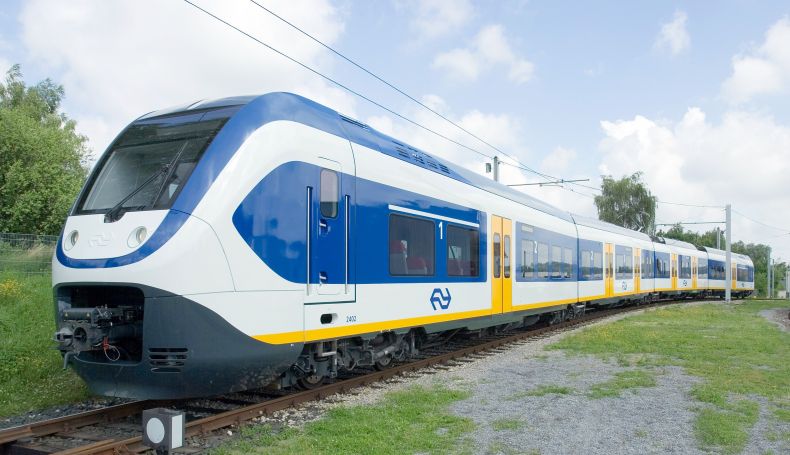 Electric trains like this now all run on wind power in the Netherlands. Photo Credit: Bombadier

The Netherlands has long been associated with the harnessing of winds. Windmills, which dot the countryside across the European nation, have been used for centuries. Winds were harnessed to mill grains and to pump water out of low-lying lands into rivers beyond the dikes so  fields could be farmed.

These days, though, winds in the Netherlands power plenty more than just mills: they also power trains.

The national railway company NS has announced that all its electric trains now run on renewable power generated by winds. “Since 1 January, 100% of our trains are running on wind energy,” the company’s spokesman said. Two years ago a Dutch electricity company called Eneco signed a 10-year deal with NS whereby come January 2018 all NS trains would run on wind energy. A mere year later all Dutch trains already do. “So we in fact reached our goal a year earlier than planned,” the spokesman noted.

And that’s a big deal because NS operates around 5,500 train trips every single day for some 600,000 passengers. These passengers are now among the first in the world to travel on wind energy alone. That feat is thanks to a battery of windmills, each of which can generate electricity, within a single hour, to power a train for 120 miles, or 200 kilometers. (Half of the windmills are in the Netherlands, while the other half in neighboring Belgium and Scandinavia.)

To make such trips even more effective, the company wants to reduce the energy used per passenger by a further 35% within three years, as compared with 2005 rates.

“Mobility is responsible for 20 percent of CO2 emissions in the Netherlands, and if we want to keep travelling, it is important that we do this without burdening the environment with CO2 and particulate matter,” one of Eneco’s  managers explained in 2015 upon the signing of the deal between the energy company and the train company. “This contract offers all Dutch citizens the option to make a climate neutral trip, regardless of distance.”

By relying on wind power alone, he added, “a whole [transportation] sector decreases its CO2 footprint enormously and sets an example for other sectors to follow.”