Rahayu the Turtle is back Home in Malaysia 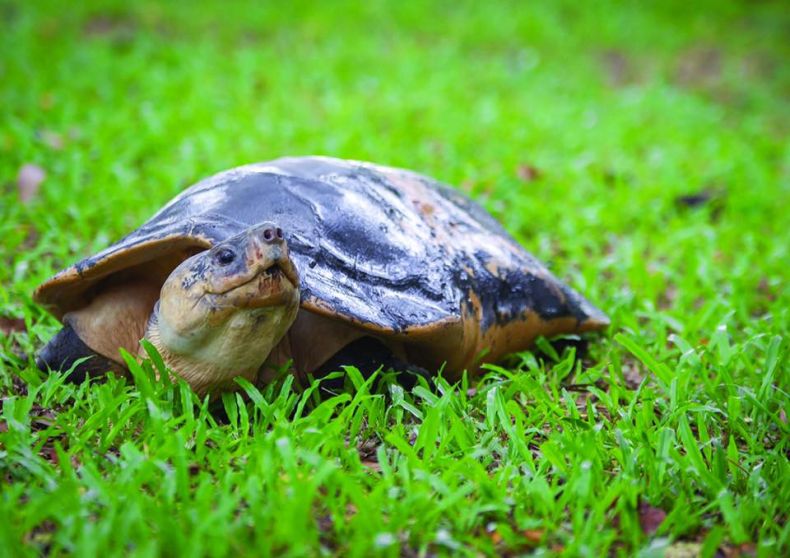 Rahayu the turtle has been returned home from Singapore. Photo Credit: Facebook

Rahayu the turtle is back home safe. She will be returned to the wild in Malaysia, where she belongs.

The endangered Malaysian freshwater turtle was rescued in Singapore in October 2015 after a local saw her crossing a road. The turtle, which weighs around 30kg, was discovered with a fish hook in her mouth. The reptile was taken in by the Animal Concerns Research and Education Society (ACRES), an animal rescue center whose staffers named him Rahayu affectionately and began to look after him.

Now ACRES has sent her to Johor in Malaysia. “It is not easy to send these creatures home but the Malaysian Wildlife Department would be receiving Rahayu in Johor and will reintroduce her back into her world,” Singapore’s Social and Family Development Minister Tan Chuan-Jin said in a Facebook post. 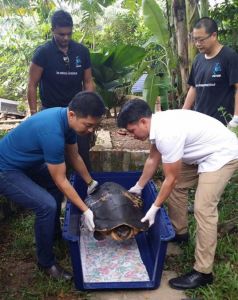 Singaporean animal experts are getting Rahayu ready for her return to Malaysia. Photo Credit: Facebook

The plan is that Rahayu will be released in a protected area in Johor if local wildlife experts deem her capable of surviving alone in the wild. “Rahayu is the first (reptile) and certainly won’t be the last [to be repatriated to Malaysia from Singapore],” said Kalaivanan Balakrishnan, the wildlife rescue center’s deputy chief executive officer. “She is an ambassador to the cause that we are undertaking, that our rescued wild animals deserve a second chance at living free and that it can be done.”

How the Malaysian freshwater turtle ended up in Singapore in the first place isn’t known. Animal experts suspect she may have been kept as a pet before being abandoned, perhaps because she had grown too large. Tan Chuan-Jin has cautioned Singaporeans against taking wild animals from neighboring Malaysia as pets. “We can all help by not generating demand for exotic and endangered pets,” he said.

Balakrishnan echoed those sentiments. “People want to keep something different, something exotic,” he said. “But these animals are smuggled in and you never know how they are smuggled in. The whole process is cruel so people need to think about how the animals come in here.”

The Malaysian giant turtle (Orlitia borneensis) is the largest freshwater turtle species in Southeast Asia. It is listed as endangered by the International Union for Conservation of Nature (IUCN). The reptiles are facing threats from habitat loss and poaching alike. They are prized as ingredients in traditional Chinese medicine and as exotic pets.