‘Stop planned Cable Car’ on Penang Hill in its Tracks 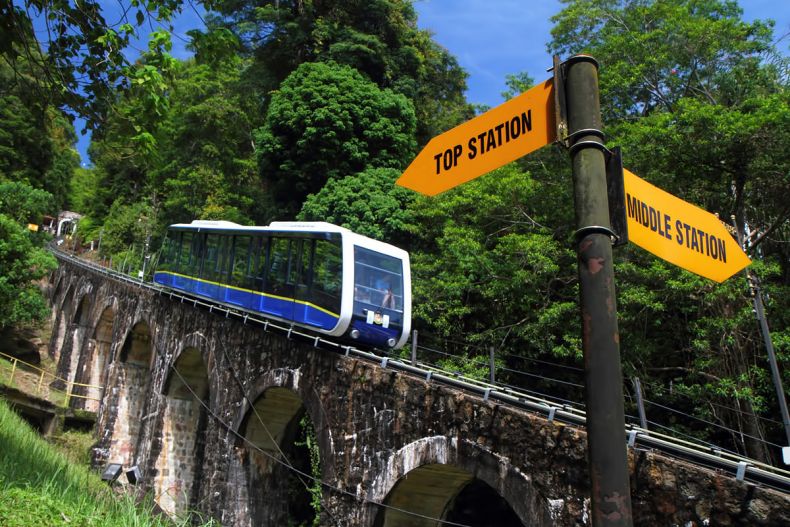 The cable car on Penang Hill is a convenience for tourists but a threat to the island's fragile biodiversity. Photo Credit: Malaysian Digest

“Any form of development, let alone a massive one, will have a serious impact on the environment such as soil erosion, loss of water supply, the flooding of the lowland nearby and air pollution apart from the destruction of trees, flora and fauna,” stressed Meenakshi Raman, a legal adviser for the civil society group Friends of Penang Hill. “That is why, for us, there is no justification whatsoever for the proposed cable car,” she added. “Recognizing that, the state authority should take every care and precaution not to trample on the environment.”

Despite fervent opposition to the project from groups like Friends of Penang Hill, the island’s Chief Minister Lim Guan Eng insists the local government will go ahead with it. The planned project is an acute reminder for local conservationists that Penang’s shrinking natural environments are under constant threat from further encroachments by developers and from further degradation through mismanagement.

Last autumn concerned citizens launched Penang Hill Watch, a crowd-sourcing initiative that has enlisted locals to monitor the forested hilly area with its rich biodiversity for any sign of degradation or encroachment. “The forested hills are Penang’s natural heritage,” the civil society group noted. “They function as water catchments to provide water supply, prevent soil erosion and landslides, are gene banks for a rich diversity of plant and animal species, and are the green lungs for nature appreciation and outdoor recreation.”

To help protect the hill better from further harm, Universiti Sains Malaysia researchers have proposed that Penang Hill be declared a UNESCO World Heritage site, arguing that the 500 hectares of hilly forest boasts unique endemic species in an ecosystem that deserves to be declared a UNESCO Biosphere Reserve. Penang Hill is home to a dipterocarp forest with submontane oak-laurel and coniferous trees, which may harbor as yet undiscovered species of insects and other animals.

Needless to say, a new cable car system, while undoubtedly a boon to footsore tourists, would pose a threat to that unique biodiversity. In addition to disturbing fragile natural habitats, the system would also draw further crowds of potentially unruly visitors. The area, Meenakshi stresses, has “a limited carrying capacity.” She elucidates: “The ecosystem can only carry so much, beyond which, it can’t manage. What happens is that you have to cater for public utilities, so a whole lot of consequential problems will arise.”

The solution then is to stop the planned development in its tracks.