Could we Refreeze the Arctic?

Ice sheets at the Arctic are melting at alarming levels. Photo Credit: Pixabay

The planet is warming. The polar ice caps are melting. Sea levels are rising. We are in for an impending environmental meltdown (literally). But there is not much we can do.

What if we could refreeze the ice at the Arctic artificially? Say, we could do that by building 10 million wind-powered water pumps that could flood the surface of the ice sheets with seawater, which would then freeze in the winter cold and thereby thicken those ice sheets in order to fortify them when the weather warms in summer. The powerful pumps could help add as much as an extra meter of ice to the current layer at the Arctic, which has been fast eroding in unseasonally warm temperatures.

Sound like science fiction? Perhaps. But it’s doable, according to Steven Desch, a physicist at Arizona State University in the United States. “Thicker ice would mean longer-lasting ice. In turn, that would mean the danger of all sea ice disappearing from the Arctic in summer would be reduced significantly,” Desch was quoted as saying. 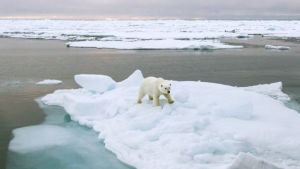 It won’t be just polar bears that lose out if the ice at the Acrtic melts. The climate of the entire planet will suffer. Photo Credit: BBC

“Our only strategy at present seems to be to tell people to stop burning fossil fuels,” observed the physicist, who, with his team, published a paper on their proposed refreezing method in the open-access journal Earth’s Future. “It’s a good idea, but it is going to need a lot more than that to stop the Arctic’s sea ice from disappearing.”

Be that as it may, his method for refreezing ice sheets at the Arctic would come at a price, and a hefty one at that. It would cost an estimated $500 billion (MR2,224 trillion). Needless to say, that’s a vast sum. Yet the Artic is huge and you would need lots and lots of pumps to make a measurable impact.

“The area of the Arctic Ocean is about 107 km2. If the wind-powered pumps are to be distributed across 10 percent of that area, this would necessitate about 10 million wind-powered pumps; if distributed across the entire Arctic, about 100 million would be needed,” the scientists explain. “[I]t would require a wind turbine with blades on order 6 metres in diameter, with weight on the order of 4,000 kg of steel. To keep this afloat would require the buoy contain a roughly equal weight of steel. As a round number, we estimate about 10,000kg of steel would be required per device.”

Equipping the Arctic with water pumps on this scale would require 100 million tons of steel per year, or more than the entire annual steel production of the United States. The mind boggles, yes. Yet something must be done to stop the Arctic ice sheets from melting so as to prevent a global catastrophe.

“It is likely that the late-summer Arctic will be ice-free as soon as the 2030s. This loss of sea ice represents one of the most severe positive feedbacks in the climate system, as sunlight that would otherwise be reflected by sea ice is absorbed by open ocean,” Desch and his colleagues explain in their paper. “It is unlikely that CO2 levels and mean temperatures can be decreased in time to prevent this loss, so restoring sea ice artificially is an imperative.”

In other words, in addition to dealing a death blow to the fragile ecosystem at the Arctic, the disappearance of the ice sheets there would exacerbate global warming because ice reflects solar radiation back into space. This would alter weather patterns across the northern hemisphere, causing the permafrost to melt, which would release yet more carbon gases into the atmosphere from their current underground depositories.

Other solutions that have been floated about how to keep Arctic ice intact artificially include dispersing bright aerosol particles over ice sheets to enhance their whiteness and so boost their ability to reflect sunlight back into space. We could also try creating artificial clouds above the region to act as natural filters for keeping the heat away from the surface of the ice.

The polar ice sheets need saving. The only question is how best to do it. Science can come to the rescue, but it will come at an exorbitant cost. We will need creative solutions to tackle global environmental problems, and refreezing the Arctic ice cap is one such solution to an acute environmental problem of our own making. We will have to pay dearly for having pumped all that CO2 into the atmosphere with wanton abandon over the past decades and centuries. Doing nothing at all, though, will cost us even more.