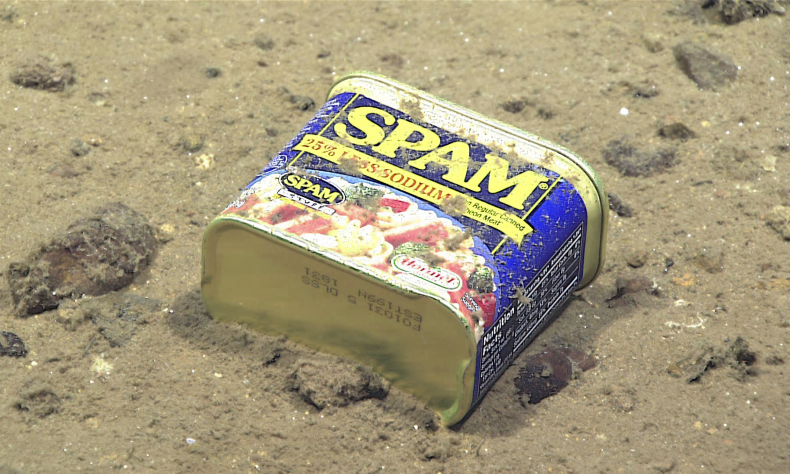 A container of Spam rests at almost 5,000 meters on the slopes of a canyon leading to the Sirena Deep in the Mariana Trench. Photo Credit: Noaa Office of Ocean Exploration

Is there a place on Earth that hasn’t been contaminated by man-made pollution? There isn’t, it turns out.

Take the Mariana Trench in the Pacific Ocean. At more than 10km deep, it is the lowest point on Earth. You would think that it was far enough from human activities to remain in pristine condition, but you’d be wrong. Beer cans, food containers, plastic bags: these and other debris from civilization litter the seafloor within the trench almost as if it was right beneath our feet.

Worse: scientists from the United Kingdom say the Mariana Trench has been polluted by “extraordinarily high” levels of industrial chemicals. After inspecting the trench’s ecosystem with a remote controlled submarine, they found that small crustaceans that thrive in the deep waters had 50 times more toxic chemicals in their systems than did crabs that live in badly polluted rivers in China.

Pause to reflect on that for a moment.

“We still think of the deep ocean as being this remote and pristine realm, safe from human impact, but our research shows that, sadly, this could not be further from the truth,” Alan Jamieson of Newcastle University in the United Kingdom, who led the research, explained. “The fact that we found such extraordinary levels of these pollutants really brings home the long-term, devastating impact that mankind is having on the planet,” he added.

Jamieson’s team, which has published their findings in the journal Nature Ecology and Evolution, has identified two types of severely toxic industrial chemicals known as persistent organic pollutants (POPs) within the self-contained ecosystem of the trench. These chemicals were banned four decades ago but they continue to persist in the environment because they do not break down, are water-repellent and can get stuck on plastic waste, hitching rides on it far and wide.

“These chemicals have previously been found at high levels in Inuit people in the Canadian Arctic and in killer whales and dolphins in western Europe,” The Guardian newspaper explains. Now, it turns out, POPs can also penetrate the most remote and deepest parts of the world’s oceans, thanks to gravity, which pulls all our waste materials inexorably downward.

Once they reach the bottom of the ocean, the chemicals are scooped up by the tiny amphipods that live there. “The very bottom of the deep trenches like the Mariana are inhabited by incredibly efficient scavenging animals, like the 2cm-long amphipods we sampled, so any little bit of organic material that falls down, these guys turn up in huge numbers and devour it,” Jamieson explained.