Social media are a ‘Threat’ to Wildlife

Last summer a wild Bornean pygmy elephant in Sabah came to global fame for its crooked tusks, which made him resemble a pachyderm version of a saber-toothed cat and duly earned him the nickname ‘Sabre.’ A few months later he was dead, having been killed by poachers for those very tusks.

Coincidence? No, it wasn’t, according to Mohamed Idris, president of the conservationist group Sahabat Alam Malaysia (Friends of the Earth Malaysia), or SAM, for short.

Many poachers, Idris says, are social media-savvy and use online tools to learn where and how best to track wild animals down. “With images of the mini elephants going viral, these got the poachers’ interest,” the environmentalist explains. “Images posted on Facebook, Twitter and Instagram can give away animals’ location. Poachers are scouring social media looking for leads on where to find endangered species.” 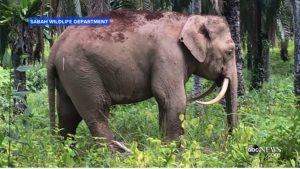 That poachers found Sabre thanks to social media cues may be pure conjecture, of course, but Idris does have a point. The convenience of social media and mobile phone apps can enable savvy poachers to locate wild animals, especially lumbering jumbos like elephants, with greater ease. It’s a form of crowd-sourcing they can rely on with other users unknowingly aiding poachers in their search for new preys with their online posts.

“Many people are unaware that poachers can use photographs of rare lions, tigers and elephants to find and kill them, by downloading digital data attached to the images, which will reveal their location,” Idris notes. “Many cameras and smartphones record the time and location where images are taken. This data is transferred when photographs are uploaded.”

In short, even as we celebrate the wonders of wildlife by taking pictures of them and uploading those pictures to social media, we may unwittingly further endanger them by exposing them and their locations to poachers. This especially applies to rare specimens like Sabre, which can be relatively easy to track  within their diminished habitats by those in the know about how and where to find wild elephants.

Some academic journals, Idris adds, citing a recent report in the British media, “have begun withholding the geographical locations of newly discovered species after being warned that the data is helping poachers and smugglers drive lizards, frogs and snakes into near extinction with their collection.”

We should do likewise. By all means, let’s continue marveling at the wonders of wildlife. But let’s not share revealing posts about them.