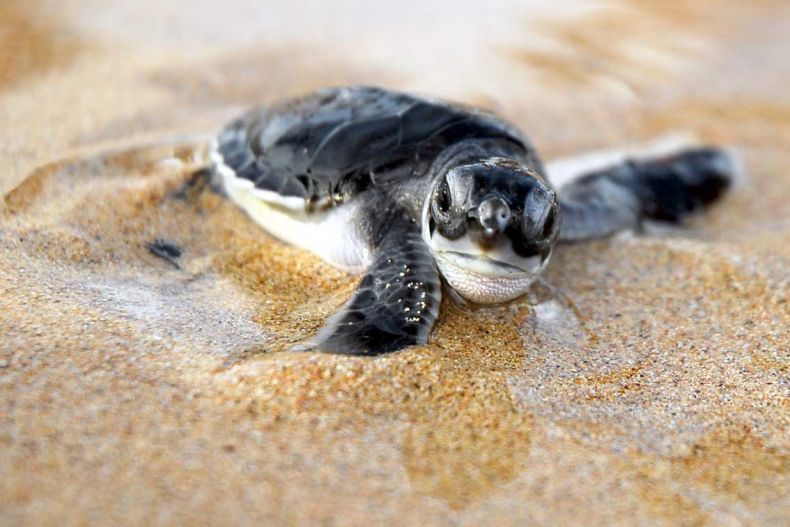 Hi there! A newly hatched hawksbill turtle takes an interest in a camera. Photo Credit: Pinterest

Sea turtles have been increasingly under threats from poachers and habitat loss, but conservation efforts to boost their numbers have been succeeding in doing just that in Labuan: boosting their number.

This is according to Anuar Deraman, the local director Malaysia Marine Park, who explained that between 2010 and 2015, as many as 9,543 hatchlings from 10,450 eggs were released into the wild at four turtle landing sites in Labuan. “Overall, the life percentage of the hatched eggs increased every year since 2011. Our efforts to conserve turtles by hatching their eggs and releasing the hatchlings into the sea since five years ago are succeeding,” he told the Bernama news agency.

A marine park at Rusukan Besar Island has served as a vital local landing place for hawksbill turtles and green sea turtles, which laid almost 5,000 eggs in those five years. The turtles set up at least 20 nests every year with an average of three parent turtle landings on the four strategic beaches that have remained in pristine condition without erosion. This, the director said, has been a key factor in boosting young turtle populations in the area.

The department’s success in turtle conservation is something to celebrate, of course. Especially because elsewhere in Malaysia sea turtles have been losing out to relentless beachside development that has been robbing them of their traditional landing sites. Their eggs have also been routinely pilfered for the exotic food trade because some people consider turtle eggs a delicacy.

Several conservationist groups have been running grassroots initiatives around Malaysia to protect hatching sites from poachers and to help hatch eggs artificially. Several of these projects have been successful in keeping local sea turtle populations steady in their numbers. Even as coastal development and other harmful activities continue to take their toll on beleaguered sea turtles, such conservation projects give us hope that sea turtles can continue to survive and thrive in the country’s waters.