Pity the Tigers: Thailand’s infamous ‘Tiger Temple’ will Reopen as a ‘Zoo’ 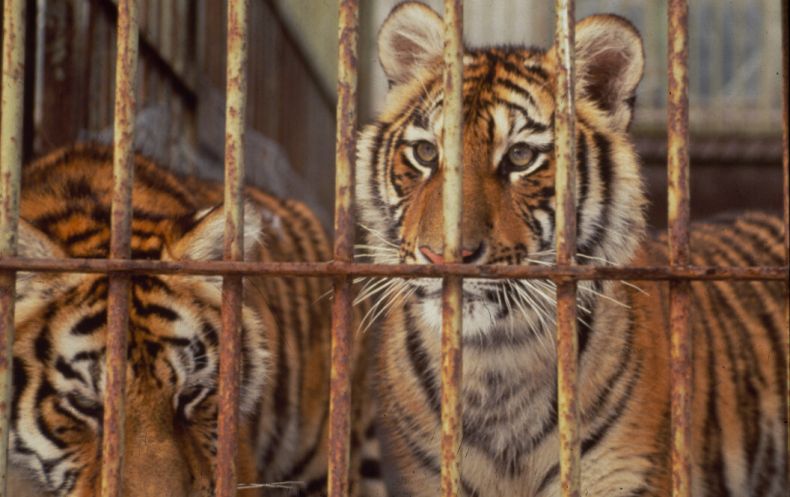 Tigers gaze out from the confines of their small cages at a tiger farm. Photo Credit: Earth Touch News

The World Wide Fund for Nature wants to have all the 200 or so tiger farms in Asia closed. That august goal, however, may have just suffered a major setback.

Last year the notorious “Tiger Temple” in Thailand was closed down by local authorities after it had transpired that the Buddhist monastery’s residents, or at least some of them, had engaged in illegally breeding, trafficking and routinely abusing the more than 130 tigers in their care. The temple’s shut-down was seen as a major success for animal rights advocates.

But now the temple is back. After slightly rebranding itself as a “zoo,” the establishment is planning to restart its operations next month at a nearby site in Kanchanaburi province in central Thailand. Worse: it will be just another tiger farm in anything but name. The rebranded establishment will have 105 tigers, transferred from another zoo, so visitors can pose for pictures with the long-suffering animals. 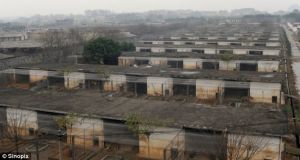 A tiger farm in China where the majestic predators are kept in appaling conditions. Photo Credit: Sinopix

When competed, the new “zoo” might house as many as 500 tigers. That’s far more than all the tigers left in the wild in Malaysia. Tiger cubs will also be on hand, as part of a “petting zoo,” so visitors can pose for pictures bottle-feeding the animals. For a fee, of course.

Depressingly, it will all be legal. “Adisorn Noochdamrong, a national park official who led the June raid on the so-called Tiger Temple, said the project is perfectly legal, as the zoo was registered two months before the police operation began,” a Thai newspaper reported. “They have the right to do that,” the official said.

It’s not as if Thailand needs any more tiger farms. The country already has some 30 such “tiger zoos” and breeding places, housing around 2,500 captive tigers in all. That’s around 15 times the number of tigers left in the wild in Thailand, whose numbers have dropped to 170 or so. “Tigers breed well in captivity,” John Baker, managing director of the conservation NGO WildAid, told National Geographic. Yet their keepers routinely do not breed the animals out of love for them. “[T]igers and parts from commercial breeders across Southeast Asia regularly end up in the illegal international wildlife trade,” Baker added.

According to a recent report by the anti-trafficking watchdog TRAFFIC, many tiger farms around the region serve as breeding facilities that clandestinely provide tiger skins, bones and other body parts on the illegal wildlife trade, to be used in traditional Chinese medicine. In fact, as many as a third of illegally traded tigers already came from such sources, based on a recent survey of the illegal wildlife trade.

Most of the tigers end up in China, which itself has at least 5,000 tigers at such breeding farms, many of which make for horrendous places where numerous tigers are kept much as battery hens, cooped up in ranks upon ranks of small cages, only to be slaughtered when time comes for their body parts to be sold. 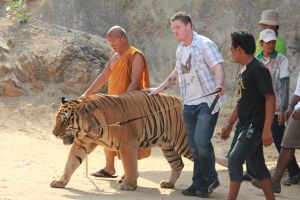 A tourist walks a full-grown tiger on a leash alongside a senior monk at Thailand’s infamous ‘Tiger Temple.’ Photo Credit: YouTube

Despite no scientific evidence to back up claims of the curative properties of traditional “medicines” like “tiger bone wine,” millions of people in China and farther afield continue to believe that if they consume such remedies they will retain or regain their virility, fortify themselves against the slings and arrows of time, and protect themselves against cancer, diabetes or other common diseases. In other words, hundreds of tigers each year must die just so people can feel better about their health prospects.

Consider this: on average two tigers are killed each week, according to TRAFFIC and WWF. “Despite repeated government commitments to close down tiger farms in Asia, such facilities are flourishing and playing an increasing role in fuelling illegal trade,” noted Steven Broad, executive director of TRAFFIC.

That is why the presence of tiger farms and “tiger zoos” in countries like Thailand poses a clear and present danger to tiger conservation efforts in Malaysia. “Criminal networks are increasingly trafficking captive bred tigers around Asia, undermining law enforcement efforts and helping to fuel demand,” said Ginette Hemley, a conservationist at WWF.  “Tiger range countries must rapidly close their farms or wild tigers will face a future only as skin and bones.”

So what can Malaysians and Singaporeans do about tiger farms in Thailand and elsewhere? Quite a lot. Such establishments largely subsist by catering to foreigners. By refusing to patronize them, we can all help put them out of business once and for all. We must also stop buying any “remedies” that have  or claim to have ingredients obtained from tigers in them.

Tigers everywhere need our help and we must all do our parts to help them.