Killing Orangutans for their Meat is an Appalling Crime 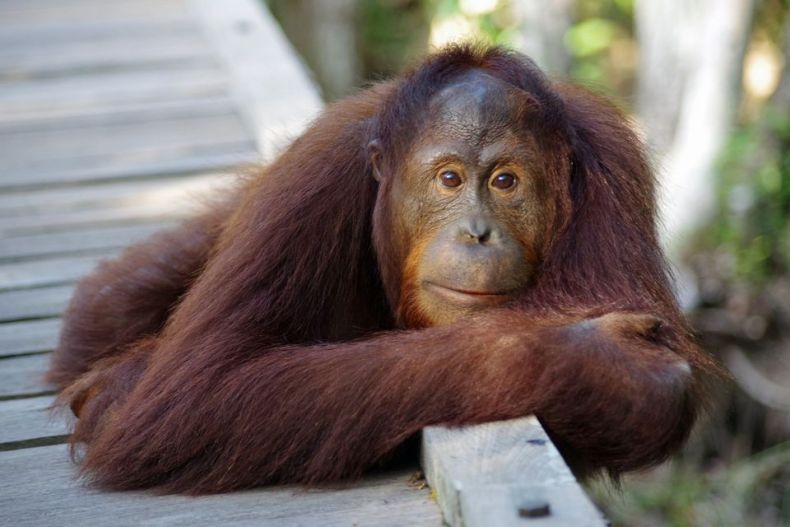 Orangutans in Borneo are critically endangered, suffering as they do from a variety of existential challenges. The grave challenges they face in the wild include habitat loss, forest fragmentation, encroaching development and the exotic wildlife trade.

Now you can add another threat to that list: being hunted for their meat. Yes, you’ve read that right.

Being hunted is, sadly, a fact of life for many wild orangutans. Photo Credit: Colourbox

According to news reports, workers on a palm oil plantation in a remote area of Central Kalimantan province in neighboring Indonesia shot and killed an orangutan so they could feast on the animal’s meat. Worse: this crime was not a one-off. Yet similar incidents rarely get reported, much less investigated by local police, said an Indonesian lawmaker who has called on authorities to apprehend the culprits.

Finding the perpetrators should not be that hard, considering that a witness to the crime provided authorities with photographs, one of which shows a man with a rifle standing over the dismembered remains of a dead orangutan. “[Another] picture showed the orangutan’s head floating in a pot. In another, several people are cutting up the primate’s flesh,” the Associated Press reported.

The wanton murder of the intelligent and loveable primates is nothing new, of course. Plantation workers and farmers have been known to kill the animals in order to stop them from damaging their crops. Although Indonesian conservation laws prescribe a severe penalty for killing orangutans, perpetrators are often left unmolested by police. The situation is hardly better in Malaysia, where orangutans likewise end up being killed at times.

Needless to say, we can ill afford to lose any more orangutans in Borneo, no matter what side of the artificial state boundaries they may live. The iconic apes, which are endemic to the island, are critically endangered and have seen their numbers drop by as much as 60% since 1950. Between 2010 and 2025, their numbers will likely drop by another fifth, which places the survival of the entire species at risk, according to the International Union for Conservation of Nature (IUCN), which has recently raised the alarm about the primates’ long-term prospects.

In the 75 years from 1950 to 2025 (or just three generations of apes) some three-quarters of Bornean orangutans (Pongo pygmaeus) will have been driven extinct in the wild, experts warn. In the four decades prior to 2010, the IUCN says, an estimated 98,730 km² of prime orangutan habitat was lost in total. By 2025, another large swathe of forest will likely have been converted to palm oil plantations. Meanwhile, the remaining protected habitats of orangutans (or around 97,716 km² in 2010) have become highly fragmented or degraded as a result of logging and further encroachments. 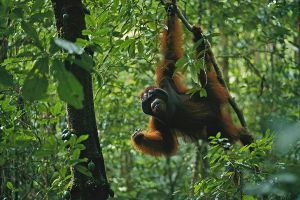 Orangutans belong in the wild, but there is less and less of that wild left for them. Photo Credit: Boston University

As if that wasn’t bad enough, Borneo’s orangutans also continue to be trafficked worldwide. According to the Great Apes Survival Partnership (GRASP), an alliance of more than a hundred NGOs and governments aimed at saving great apes in the wild, more than 1,800 great apes have been seized from illegal traders since 2005. “Seizure records in the database date back to 2005, and include any removal of great apes from unlawful situations,” GRASP notes. “Seizures were recorded in 23 nations, almost half of which were non-range states from Asia, Europe and the Middle East.”

More than 90% of all recorded seizures took place within national borders, which means they were left unrecorded in widely used illegal trade databases managed by CITES and other regulatory agencies. “As a result,” notes GRASP, “the trade in endangered and critically endangered great apes was dramatically under-reported.”

All this makes for a dismal outlook for the primates, who are among our closest evolutionary relatives. The way we treat them reflects on us all. Treat orangutans the way you would want to be treated by them. Don’t rob them of their ancestral forests, don’t kill them, and certainly do not eat them.