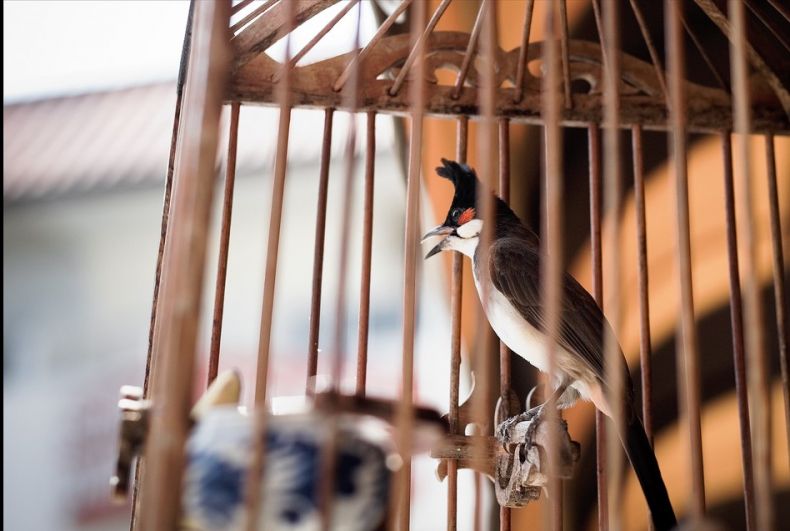 A myna languishes in a cage. Photo Credit: Jamie Monk

Another five are down. Wildlife traffickers, that is. In five separate clampdowns on wildlife trafficking in later February, Malaysian authorities seized large numbers of endangered animals from wildlife traders, all of whom will be facing charges under the country’s Wildlife Conservation Act 2010.

Meanwhile, at Kuala Lumpur International Airport alert wildlife officials nabbed a Bangladeshi man who was trying to smuggle 35 black pond turtles (Geoclemys hamiltonii) out of Malaysia in two suitcases. All commercial trade in the endangered turtles is prohibited by the International Trade in Endangered Species of Wild Fauna and Flora (CITES). The man is facing charges under the Wildlife Conservation Act 2010, according to Perhilitan Director-General Abdul Kadir Abu Hashim. He has been released on bail.

Malaysian officials speak to the press after seizing scores of protected birds from a wildlife trafficker. Photo Credit: Perhilitan

In three other raids in as many towns in Selangor, Perhilitan officers arrested a local woman and seized a juvenile small-clawed otter (Aonyx cinereus) and a common palm civet (Paradoxurus hermaphroditus), which she had illegally in her possession. Officials also stopped another local woman from selling four protected birds of prey: a crested goshawk (Accipiter trivirgatus), a changeable hawk-eagle (Nisaetus cirrhatus), a white-bellied sea eagle (Haliaeetus leucogaster) and a black eagle (Ictinaetus malaiensis). And they confiscated a juvenile saltwater crocodile (Crocodylus porosus) from a local man. He was either seeking to sell the animal or keep it as a pet.

All three traffickers face the prospect of a fine of up to MR850,000, if convicted. “We warn those keen on keeping wildlife as pets to adhere to the law. Those who insist on flouting the law will be severely dealt with and be brought to justice,” Abdul Kadir said.

Conservationists have hailed the recent successes by Perhilitan to continue rolling back the exotic wildlife trade in Malaysia. “The string of successful busts over the past year is a testament to vigilance,” said Kanitha Krishnasamy, senior program manager for TRAFFIC in Southeast Asia. “We congratulate Perhilitan for continuously fighting this battle and hope that these offenders, if found guilty, would face the full brunt of the law because the hundreds of animals poached from the forests or smuggled out of the country is no small matter.”

It’s no small matter indeed. The trade in exotic animals must be stopped.