Wearable technologies are becoming increasingly popular: smartwatches, fitness bands, virtual reality headsets. According to some industry experts, by 2020 the wearables market will be worth $34 billion.

Wearables that replicate the features of smartphones are cool gadgets. But can they also be tools for sustainability? The answer is yes.

With new and improved mobile devices being introduced all the time, electronic waste is becoming a massive problem worldwide. More and more old cell phones and electronic devices end up in landfills, where they pose severe environmental hazards. But what if we could turn some of those unwanted old devices into something new, useful and fashionable?

Enter O2 Recycle. The British digital company has launched a campaign to recycle old mobile devices through a project called the “Walkie Talkies.” The company has partnered with shoe designer Sean Miles to incorporate old LG and Nokia handsets (the ones with retro keypads) into iconic shoes such as Nike Air trainers and Christian Louboutin heels. The handsets inserted into soles are fully functional, offering basic features like the ability to call and send text messages.

That feature should come in handy as retro handsets are coming back into vogue: just look at Blackberry making a comeback with QWERTY keypads on smartphones. SMS is also on the way back despite the prevalence of Internet-based messaging apps. As basic mobile plans now offer unlimited call and text packages and Internet usage becomes more expensive, more and more people will be encouraged to switch back to using SMS. 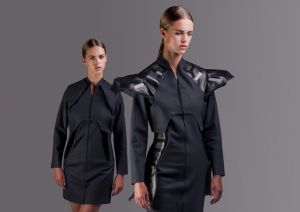 To further support their goal of sustainability, the tech firm has leveled up their “upcycling” project by converting waste materials into new and desirable items. Aside from their James Bond-inspired shoes, they have also launched a “Talk to the Hand” glove, which allows users to make or receive calls from a glove via Bluetooth. “I hoped that, by turning them into Walkie Talkies, I would raise a smile and perhaps a laugh and create things that people wanted once again,” Sean Miles said on O2 News.

Last year saw  fashionable hi-tech items that offer people a way to track their health, such as Ralph Lauren’s smart shirt. Already in 2014, Solar Fiber’s Meg Grant announced revolutionary clothing that charges smartphones via solar power. The company is working on a flexible photovoltaic fiber that turns solar energy into electrical power via a yarn and introduced the solar shawl prototype.

Similarly, the people behind Wearable Solar have also developed clothes that integrate solar panels into textiles. They have introduced the Solar Dress and Solar Coat, which can capture the rays of the sun and convert them into electricity as you go about your business outdoors. All you have to do is wear such clothing. “If you work in the full sun for an hour, the solar cells can store enough energy to allow a typical smartphone to be 50% charged,” said Pauline van Dongen, one of the research heads at Wearable Solar.

From body heat to electricity

But it isn’t just sunlight that can power wearable devices. Body heat can do that too. Scientists at North Carolina State University are working on wearable thermoelectric generators that can harvest body heat and turn it into electricity.

“Wearable thermoelectric generators generate electricity by making use of the temperature differential between your body and the ambient air,” explains Daryoosh Vashaee, head researcher at NC State and an associate professor of electrical and computer engineering. The new device is “lightweight, flexes to the body and generates far more electricity.”

It’s also pretty thin: just 2mm. It can be attached to T-shirts or directly onto the skin and is able to generate up to 20 µW/cm² (which can charge a smartphone battery up to 50%). It’s also lighter and more comfortable to use as it doesn’t use a heat sink.

And there you have it: Technology, when maximized to its full potential, can offer remarkable solutions to the world’s environmental problems. These wearable hi-tech devices and others like them can promote sustainability and a greener society.