Orangutans Know when you Don’t Know 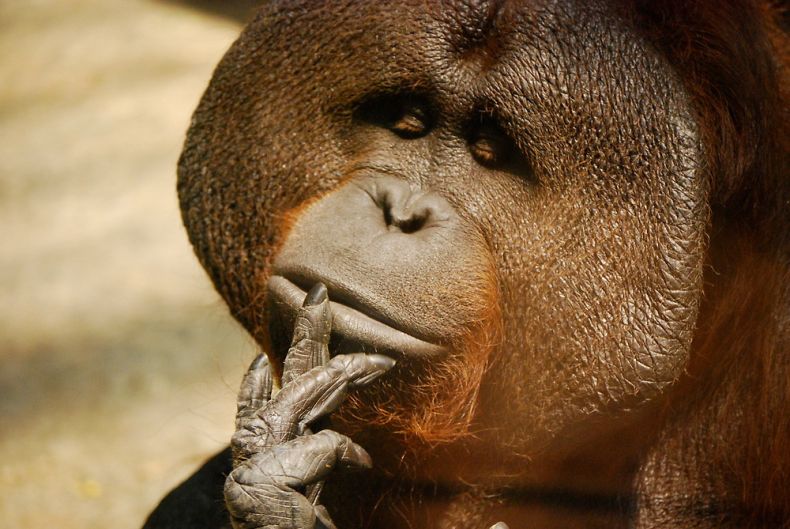 Orangutans are much smarter than you may think. Photo Credit: Redbubble

A case in point: they can tell truths from lies. Scientists now have the evidence to prove it. German researchers at the Max Planck Institute for Evolutionary Anthropology conducted psychological experiments with nearly three dozen great apes, including chimps, bonobos and orangutans at a zoo in Leipzig, Germany. 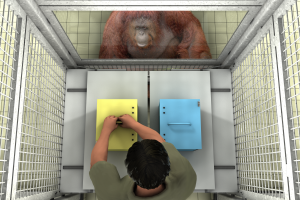 An orangutan partakes in a psychological test in Germany. Photo Credit: Leipzig Zoo

In the series of tests, whose results have been published in a scientific journal, each of the primates was shown how to slide open the sides of two differently colored plastic boxes, one blue, one yellow, that each had a window built into them on one side so that only the apes could see into the boxes. The apes could choose whether to open the blue or the yellow box.

In both cases, the experimenter pretended to try and retrieve the object from the empty box appearing as if he did not know that it was not there. The apes were then allowed to choose either of the boxes they liked, for a reward. “In three quarters of the trials where the experimenter was out of the room during the swap – a condition defined as false-belief – the apes chose the box with the object in it rather than the box the person was trying to open,” a scientific blog explains.

This finding has led the researchers to conclude that the primates can “distinguish between true and false beliefs in their helping behavior,” the scientists explain. “Great apes thus may possess at least some basic understanding that an agent’s actions are based on her beliefs about reality. Hence, such understanding might not be the exclusive province of the human species.”

In other words, great apes may be able to understand false beliefs in others and help them accordingly. This is an ability that young children develop on their own, but it seems that orangutans, chimps and bonobos, too, may possess it.