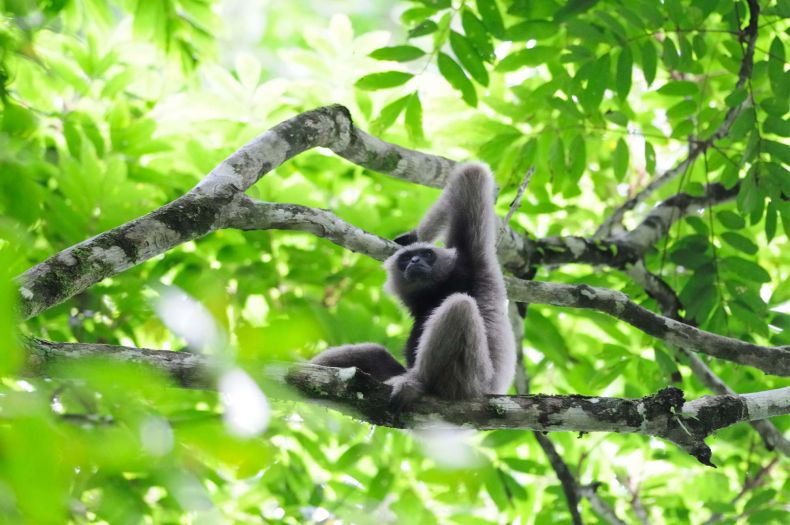 A gibbon perches in a tree in Sabah. A new action plan by the government is reportedly aimed at preserving forests, rivers and seas in the state. Photo Credit: Borneo Adventure

Land, air, water, biodiversity and social dimension. These are the five areas of environmental conservation that the state government of Sabah has set out to target in a set of comprehensive policies.

The Sabah State Policy on the Environment at the State Assembly, which has been launched by Chief Minister Musa Aman, has been touted as an important step towards better stewardship of Sabah’s natural resources. The policy seeks to keep Sabah’s air clean, its rivers and forests intact, its seas teeming with life and its communities content.

The prescribed series of action plans is set to be fully implemented over 15 years starting from next year and running until 2033. “Its three objectives are to provide a vision for environmental conditions and standards, an environmental framework for regulatory mechanisms, and guidance for all decision makers and implementing agencies in the execution of the mandates and duties,” The Daily Express reports.

“The formulation of the policy is timely for Sabah in view of the need to improve environmental performance in all sectors of the State economy as well as society,” Musa said. “The state’s robust economic developments have depended closely on the utilization of natural resources, which has brought immense benefits to  society,” he noted.

“Thus the State Government has continuously endeavored to harmonize the escalating challenges in the management of the environment and the natural resources,” the chief minister added before he went on to explain that today’s complex environmental issues require long-term holistic solutions. “I note that the policy will form as catalyst to make the state of Sabah a liveable state based on its strategic location, high diversity natural resources, cultures and heritage of the people and a clean and healthy environment.”

To make sure that those solutions do indeed get implemented, he said the state’s government has just finalized 83 strategies and 195 action plans based on five thematic aspects, including sustainable land use, clean air, better management of water sources and the maintenance of biodiversity. The policy places a premium on developing a green economy in Sabah, encouraging sustainable lifestyles among citizens, and reducing the state’s carbon footprint.

Ambitious? Certainly. Especially in a state that is blessed with one of the world’s most biodiverse areas but is also cursed with rampant destruction of its natural environment through deforestation, poaching, pollution and other ills. Here’s hoping that local politicians will indeed do more than just pay lip service to the cause of environmentalism.