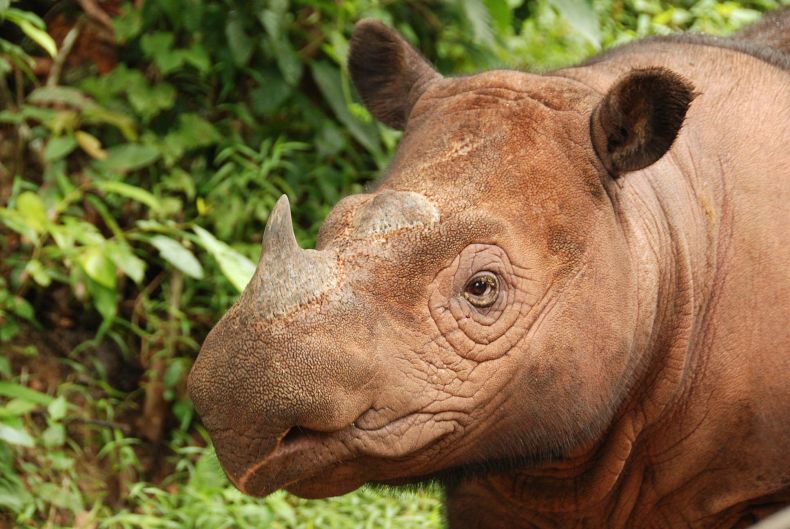 Sumatran rhinos are on the brink of extinction in Malaysia and Indonesia. Photo Credit: Facebook

Puntung the rhino looked like she might not make it. Now it appears she will pull through. One of Malaysia’s last three Sumatran rhinoceroses is on the mend, thanks to nonstop medical care.

In March, Puntung fell critically ill after she had developed a bad abscess on her upper jaw. The infection did not respond well to treatment, which raised fears that the female rhino, who was captured from the wild in 2011 and is around 25 years old, might succumb to the disease. She became lethargic and stopped eating.

Local wildlife experts and officials, however, pulled out all the stops to try and save the ailing rhino, a gentle creature beloved by her keepers. Several foreign experts were flown into Sabah to perform a long and complicated operation on her. During the hours-long procedure, a Thai veterinary dentist, Dr. Tum Chinkangsadarn, extracted two molars and one premolar from her  left upper jaw. “This was a remarkable and successful operation that came about as a result of global discussion and multi-national collaboration over the past two weeks,” said Augustine Tuuga, director of Sabah’s Wildlife Department. 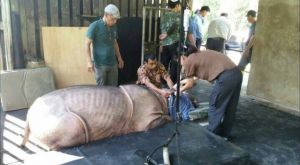 Experts sedate Puntung the rhino before a life-saving operation on her. Photo Credit: Borneo Rhino Alliance

“Sabah thanks Dr Tum and the team who had not worked together before but who did a fantastic job,” he added. “Dr Abraham Mathew, senior veterinarian from Singapore zoo helped with anaesthesia. Dr Johan Marais and Dr Zoe Glyphis of South Africa-based ‘Saving the Survivors’ initiated the planning, advised on procedures and provided major financial support to ensure that the team got together in Tabin.”

According to the Thai veterinary surgeon, one of her large molars had become severely calcified, which led to a buildup of bacteria inside Puntung’s mouth and caused the abscess. Two other adjacent teeth had also come loose and had to be extracted as well.

No sooner had Puntung awakened from the anesthesia than she started showing signs of improvement. “Incredibly, she started feeding within two hours of the operation ending,” said Dr. Zainal Z Zainuddin, a vet at the Borneo Rhino Alliance. “But we are not done yet,” he cautioned. “There will be a period of post operation care which will mean trying to keep Puntung clean, stress-free and under medication including for pain relief.”

If all goes well (and fingers crossed on that!), Puntung will fully recover from her ordeal, much to the relief of conservationists and animal lovers.