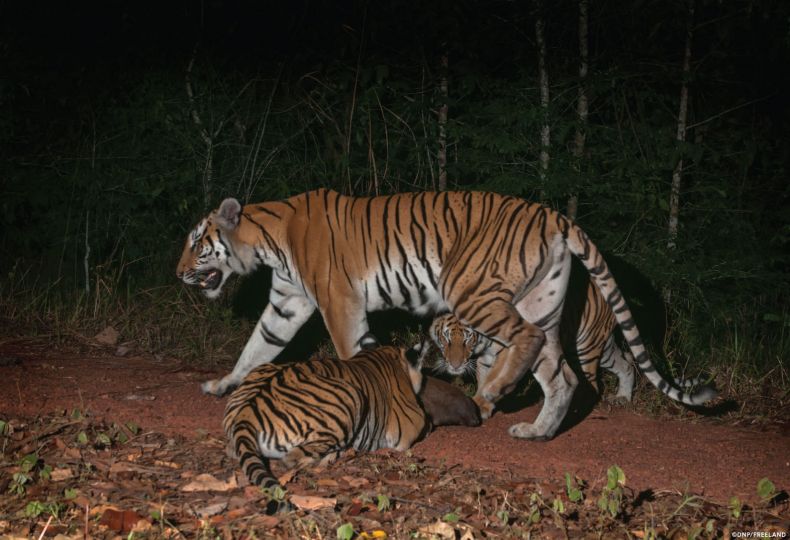 Two tiger cubs inspect a rock on a forest trail alongside their mother in an eastern Thai jungle. Photo Credit: DNP/Freeland/Panthera

Tigers producing cubs in the wild should be a simple fact of nature. Sadly, it tells us a lot about the state of affairs in the world we’ve created that such a commonplace event can now be seen as something of a “miracle.”

To wit: In neighboring Thailand, conservationists have hailed the discovery that a new breeding population of Indochinese tigers exists. They’ve called it a “‘miraculous’ victory for a sub-species nearly wiped out by poaching.”

What has triggered this outpouring of renewed optimism are images of several tigers, including six cubs, that were taken by camera traps in a jungle in eastern Thailand last year. The photos have provided firm proof that Indochinese tigers, the northern cousins of our own Malayan tigers, continue to breed in the wild in isolated patches of forest. 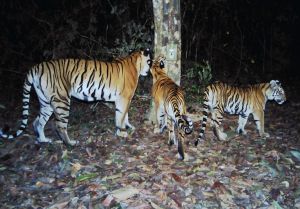 A female tiger and her cubs inspect a tree inside a forest in eastern Thailand. Photo Credit: Photo Credit:
DNP/Freeland/Panthera

This newly discovered breeding population is only the second known such population of Indochinese tigers, with the other one being in a forest corridor in western Thailand, near the country’s border with Myanmar. “The extraordinary rebound of eastern Thailand’s tigers is nothing short of miraculous,” said John Goodrich, director of the tiger program at the international wild cat preservation group Panthera.

The camera trap images show female tigers ambling around the jungle with their cubs, which are doing what tigers often do: inspecting their environs curiously. A battery of 156 cameras placed around the Dong Phayayen-Khao Yai forest complex captured the images of young cubs in a relatively remote area that continues to have a density of 0.63 tigers per 100sqkm. The ratio is very modest and is “on par with some of the world’s most threatened tiger habitats, but still means there is a population of at least 23 of the big beasts roaming wild,” according to a conservationist group.

Once, just as in Malaysia, thousands of tigers roamed the jungles of much of Southeast Asia. Today a mere handful remain, increasingly beleaguered, in their much-diminished habitats. Current estimates put the number of Indochinese tigers at around 22o in Thailand and Myanmar. They’ve practically gone extinct already in Cambodia, Laos and Vietnam because of endless habitat loss and relentless poaching.

The task is now to ensure that the young cubs and their parents can remain unmolested by poachers who are constantly out to snare any last remaining wild tigers from Thailand to Malaysia.