Atmospheric concentrations of CO2 have never been so high in human history. Photo Credit: Fotolia

We’re continuing to break records as a species. Unfortunately, they are the wrong sorts of records. A case in point: our relentless pumping of CO2 into the atmosphere at breakneck speed.

Only last September we reached an environmental milestone by having levels of carbon surpass 400 parts per million (ppm) in the atmosphere. Although the number itself is largely symbolic, it is well above 350ppm, which is still considered safe by scientists who have warned that we’ve reached a tipping point on climate change. 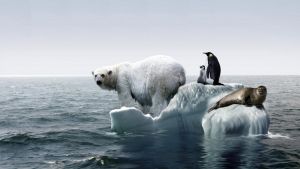 Increased global temperatures will be a disaster for myriad ecosystems, such as those at the poles, where melting icecaps will endanger polar bears and other endemic creatures. Photo Credit: Flickr

Barely a few months later, in April this year, we reached another milestone: 410ppm. It was recorded at the mountaintop Mauna Loa Observatory on the island of Hawaii. Climate scientists were not surprised by the increase, but we should all be concerned just the same. “We’re in a new era,” said Ralph Keeling, director of the Scripps Institution of Oceanography’s CO2 Program in San Diego. “And it’s going fast. We’re going to touch up against 410 pretty soon.” And we duly have.

It was Keeling’s father who first began measuring atmospheric CO2 at the same observatory in Hawaii in 1958. Back then the concentration of CO2  stood at a “mere” 316ppm, which was only slightly higher than the pre-industrial level of 280 ppm. Last year’s level of 400ppm served up a warning, loud and clear, about the dangerously high levels of atmospheric CO2.

This year’s increase serves up another warning. We’re pushing the Earth’s climate back to that of an era that last prevailed some 200 million years ago in the Triassic period, when dinosaurs roamed the planet. Albeit global climate emissions seem to have levelled off, they have done so at alarmingly high levels, which means that more and more CO2 will be accumulating in the planet’s atmosphere.

In lockstep with rising concentrations of atmospheric CO2, global temperatures have been on the upswing, wreaking havoc with regular climate patterns. Last year was the hottest year on record since 1880, when we first started measuring global temperatures. The year 2016 was 1.1 degrees C warmer than pre-industrial levels.

“At the current rate of growth in CO2,” Yale University explains, “levels will hit 500 ppm within 50 years, putting us on track to reach temperature boosts of perhaps more than 3 degrees C (5.4°F) — a level that climate scientists say would cause bouts of extreme weather and sea level rise that would endanger global food supplies, cause disruptive mass migrations, and even destroy the Amazon rainforest through drought and fire.”