The bacteria that causes bubonic plague may lie dormant in thawing permafrost in Siberia, ready to burst forth and take new victims. Photo Credit: Flickr

Climate change is bound to usher in a world beset with calamities. Rising sea levels will inundate low-lying areas, displacing millions of people. Weather patterns will become more extreme and unpredictable, causing widespread devastation. Even turbulence, that dreaded foe of frequent fliers, may well get worse.

But that’s not even half of it. Here’s another calamity that climate change may bring: global epidemics of long-forgotten diseases. As the Siberian tundra, once a perennially frozen wasteland, continues to thaw, ancient viruses and bacteria that have been locked away safely in thick sheets of ice may bounce back to life and begin infecting animals and people anew. Worse: we won’t have any natural resistance or readily available medicine to fight off old-new diseases triggered by these viruses and bacteria. 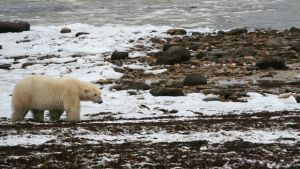 Last August in the remote Yamal Peninsula within the Arctic Circle, some 20 people were infected by anthrax, including a 12-year-old boy who died. The cause: melting ice.

“The theory is that, over 75 years ago, a reindeer infected with anthrax died and its frozen carcass became trapped under a layer of frozen soil, known as permafrost,” BBC Earth explains. “There it stayed until a heatwave in the summer of 2016, when the permafrost thawed. This exposed the reindeer corpse and released infectious anthrax into nearby water and soil, and then into the food supply. More than 2,000 reindeer grazing nearby became infected, which then led to the small number of human cases.”

Scientists are concerned that deep within the ice in the tundra viruses and bacteria that can survive for hundreds, thousands or even millions of years in a dormant state may be thawed out, allowing these pathogens to gain a new lease on life and “potentially open a Pandora’s box of diseases.”

“Permafrost is a very good preserver of microbes and viruses, because it is cold, there is no oxygen, and it is dark,” Jean-Michel Claverie, an evolutionary biologist at Aix-Marseille University in France, told the British news service. “Pathogenic viruses that can infect humans or animals might be preserved in old permafrost layers, including some that have caused global epidemics in the past.”