Malaysian Officials must Stay Vigilant in the Face of rampant Trafficking 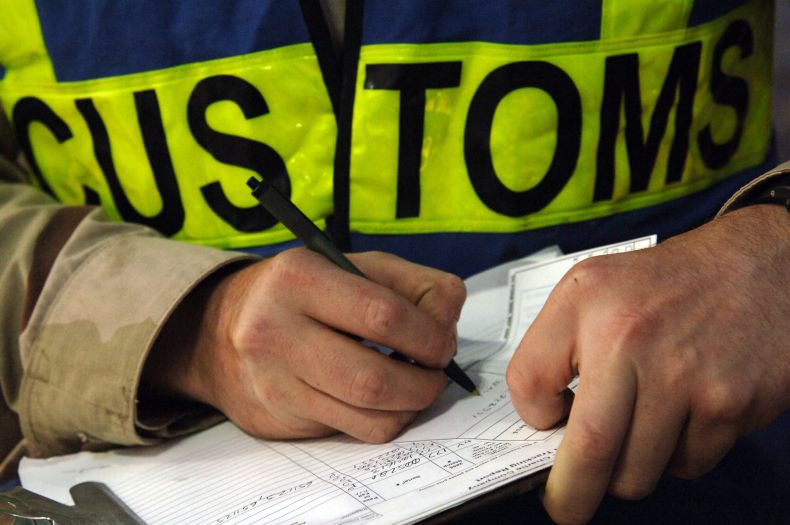 Malaysia is a major gateway for international wildlife traffickers into Southeast Asia. We’ve long known that, of course, but just in case here is a reminder:

The country, which boasts one of the most biodiverse but also most threatened environments on the planet, is “the world’s paramount ivory transit country, with its ports serving as a major gateway for the flow of tonnes of illicit ivory between Africa and Asia.”

So said TRAFFIC, one of the world’s leading anti-wildlife trafficking watchdogs, based on its report published last year. 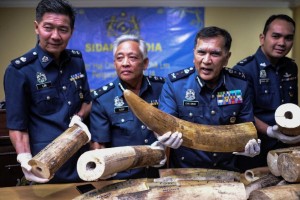 “Ivory seizure records from January 2003 to May 2014 linked Malaysia to 66 confiscations worldwide totalling a massive 63,419kg,” TRAFFIC elucidated. “Only 19 of the seizures were made in Malaysia. The remaining 47 occurred outside the country, mostly after shipments had passed undetected through Malaysia’s ports.”

Last March, for instance, two large shipments of ivory from Africa were seized at Kuala Lumpur’s international airport, including one 101kg hoard stashed in the luggage of a Vietnamese national. The very next day Malaysian customs officials discovered another haul of elephant tusks, amounting to 58 kilograms, in the bag of another Vietnamese passenger who had just flown in from Addis Ababa in Ethiopia and was on his way to Hanoi.

“The sheer volume of ivory flowing through Malaysia’s ports has flagged it as a country of concern at the global level,” noted Kanitha Krishnasamy, senior program manager for TRAFFIC in Southeast Asia.

Then there are rhino horns. Just last month, Malaysian authorities at Kuala Lumpur International Airport managed to seize a shipment of 18 rhino horns from Mozambique, which had been flown from Africa into Malaysia via Doha in Qatar. The horns amounted to 51.5kg and would have been worth almost RM14 million on the black market. “Traffickers are varying their routes to avoid detection and this case clearly points to the need for vigilance throughout Southeast Asia,’’ Kanitha observed.

Now we can also add pangolin scales to the list of illicit fare that keeps being flown into the country from Africa for destinations elsewhere in Southeast Asia: mostly China and Vietnam. 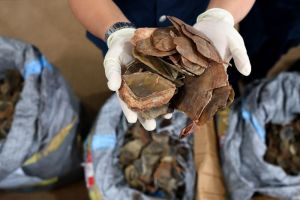 A Malaysian customs official displays some of the pangolin scales that were discovered in two separate shipments from Africa at Kuala Lumpur’s International Airport. Photo Credit: AFP

Just now two large hauls of pangolin scales from Africa were discovered in 18 gunny sacks at KLIA. The scales came from an estimated 1,400 African pangolins and weighed 712kg in total. This indicates that despite stepped-up efforts by Malaysian officials to crack down on rampant wildlife trafficking, international smuggling syndicates continue to use the country as a transit point with impunity.

“Clearly, smugglers see Malaysia as a suitable country to route their illegal shipments through,” Kanitha says. “This is bad for the country but it also presents an opportunity for law enforcement to step up their game and tackle both the illegal ivory and pangolin trades.”

Getting tough on traffickers involved in smuggling ivory, pangolin scales and other prohibited wildlife items must be, she adds, “a top priority for national enforcement agencies.”

Yes, it must be. As traffickers remain relentless, Malaysian customs officials and wildlife agencies must be at the top of their game to try and stop the endless flow of illicit wildlife parts into and out of the country.