Hundreds of rare Tortoises from Madagascar are Discovered at KLIA

Another day, another seizure of exotic animals smuggled surreptitiously into Malaysia. This time alert customs officials seized 330 tortoises flown into Kuala Lumpur International Airport (KLIA), which has been serving as a favored destination for international smuggling syndicates.

Acting on a tip-off, Malaysian officials discovered 325 Indian radiated tortoises and five ploughshare tortoises packed into five boxes, which had been labelled as containing stones and registered with a fake business address in Selangor. The reptiles, which had been wrapped in tissue and packed tightly into the boxes, managed to survive the ordeal. They would have been worth RM1.2 million ($277,000) on the black market. They had been flown into Malaysia on an Etihad Airways flight from Antanaviro Airport in Madagascar via Abu Dhabi.

Both radiated tortoises and ploughshare tortoises are highly sought as exotic pets despite being endangered and fully protected in Madagascar. All trade in them is prohibited by the Convention on International Trade in Endangered Species of Wild Fauna and Flora (CITES). People found guilty of illegally importing the reptiles into Malaysia face a fine of up to 20 times the value of the smuggled items and three years in prison, or both.

“We are very serious about tackling wildlife crime involving Malaysia, especially through KLIA,” said Abdull Wahid Sulong, customs deputy director for Enforcement and Compliance. He has called on the public to provide information about the smugglers, who remain at large. 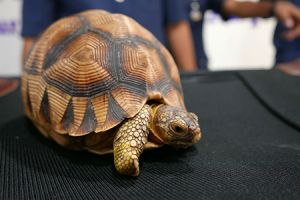 This seizure of the turtles comes hard on the heels of recent discoveries of large illegal shipments of rhino horns and pangolin scales flown into Malaysia via KLIA. It further highlights the need for Malaysian officials to remain vigilant with the country continuing to serve as a major trafficking hub into and out of Southeast Asia.

Conservationists have hailed the latest success in seizing illegally trafficked wildlife from smuggling rings, especially because in this case the trafficked animals are still alive. “The string of seizures certainly shows that Malaysian Customs means business and TRAFFIC is glad to see this action against organized criminal wildlife trafficking,” said Kanitha Krishnasamy, senior program manager for TRAFFIC in Southeast Asia.

“However, it’s worrying that shipments headed for Southeast Asia from Africa via the Middle East are only detected in the region: it clearly points towards the need for greater scrutiny at airports both at points of origin and at transit points such as Doha, Dubai and Abu Dhabi,” she added.

This is the third time this year, TRAFFIC notes, that Malaysia has been linked to a seizure of critically endangered ploughshare tortoises. “Last week a Malaysian man was caught at Taoyuan International Airport in Taiwan for attempting to smuggle three Ploughshare Tortoises from Malaysia into Taiwan. In March, a Plougshare Tortoise was among other species discovered in Taiwan in a shipment of shoes from Penang, Malaysia,” the nonprofit explains.

Sadly, widespread trafficking in one of the world’s rarest reptiles indicates that there remains a thriving black market in these tortoises as well as other endangered animals within Malaysia. We can all do our part to stop that by rolling back demand at source for these endangered animals. Report any sign of trafficking and educate exotic animal enthusiasts about the need to stop buying endangered animals.