Lasah can’t be Doing that well in LEA 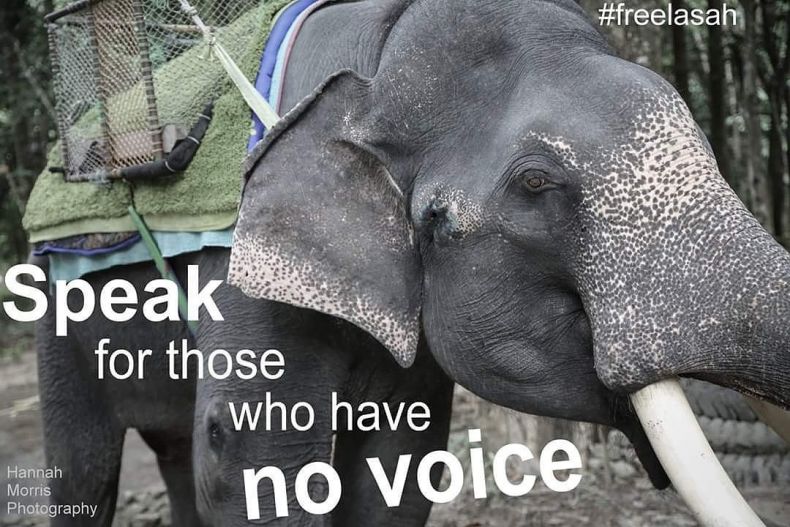 The plight of Lasah, a 37-year-old elephant kept at an amusement park in Perah, has received widespread attention over the past months. Photo Credit: Hannah Morris via Photos for Lasah on Twitter

If you ask Malaysian authorities, Lasah the elephant is well fed, well kept and well and truly happy at the Langkawi Elephant Adventures (LEA) amusement park on Langkawi island in Kedah, where he has been kept for years for the amusement of visitors. Recently, government-appointed wildlife officials and animal experts tasked with investigating the elephant’s condition decided that there were no grounds for removing him from LEA.

All good then? Hardly. 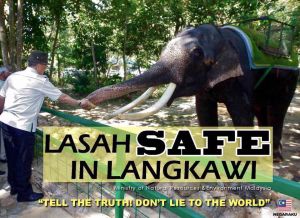 In a telling bit of misdirection, the Ministry of Natural Resources and Environment, whose officials were assigned to check up on Lasah at the park to determine whether he was kept according to Malaysian animal welfare guidelines, have posted a picture of what they assume to be a happy elephant. In it, Lasah is being fed a treat by Natural Resources and Environment Minister Wan Junaidi Tuanku Jaafar, who visited the park in March. Lasah, it must be said, does appear to be healthy and in good shape in the photograph.

There is just one problem: he is saddled with a howdah. That alone is a telltale sign that Lasah isn’t exactly living it up at LEA, despite what officials and the park’s representatives might say.

Elephant rides are a form of cruelty to animals. Saddled with howdahs and ridden regularly, the jumbos routinely end up suffering from exhaustion. “The average weight that a trekking elephant carries each day all day is around half a tonne allowing for 150 kilo chair plus 4 guests,” explains the nonprofit Friends of the Orangutans (FOTO), which has been campaigning for over a year to get Lasah freed from the amusement park and relocated to an elephant sanctuary in Sabah.

“You will see permanent indentations on elephant backs where these chairs have been. Elephants live as long as humans and are often worked to death,” FOTO adds.

But it isn’t just the weight that matters. Blankets laid across their backs to protect their skin from being chafed by their saddles can prevent elephants from cooling down in the heat, which increases the chances of heat stroke. In the image provided by the ministry, Lasah has thick blankets laid on his back.

In addition, wild-born elephants like Lasah that are chain-ganged into carrying people on their backs for fun have all gone through a process of what is called the “training crush,” whereby they are beaten and terrorized into obeying every command by his keepers without protest. In essence, the animals’ spirit is broken just so they become pliable.

Bizarrely, government officials and LEA’s management alike insisted that the elephant rides at the park are for Lasah’s benefit because it’s a form of exercise for him. And as if that wasn’t enough, FOTO has demonstrated with solid photographic evidence that Lasah is kept chained up at night and separated from other elephants, which is a form of cruelty in itself to a highly social animal like an elephant. 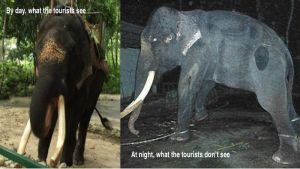 Friends of the Orangutans insists Lasah is in dire straits at LEA. Photo Credit: FOTO

Not surprisingly, FOTO isn’t pleased with the official verdict, nor should it be. The group has been contesting claims by LEA that Lasah is kept well and is in fine condition at the amusement park. “The ministry and LEA claim the latter abides by the law,” FOTO explains. “However our emails to the former regarding Lasah’s [daily] chaining relating to Malaysian wildlife laws were never [addressed].”

Many animal lovers across Malaysia and farther afield have likewise reacted angrily to the government’s assessment that they have seen nothing untoward in the way LEA has been treating Lasah.

“You have no respect for this beautiful being, and you should be ashamed to think that Lasah’s conditions are acceptable!” wrote one commenter in one of the hundreds of Facebook posts that people have left in response to the government’s decision not to pursue any action against LEA over its handling of Lasah. “[S]hame on you the Malaysian government for not stopping the abuse of this beautiful elephant Lasah and [letting] her at last enjoy some life at a sanctuary,” wrote another, echoing scores of other commenters.

Luckily for Lasah, his numerous supporters won’t be abandoning him just yet. “We will not give up on Lasah and will continue campaigning,” FOTO insists. As part of the ongoing campaign, a supporter of the group has started a petition to demand TripAdvisor, a powerful online travel website that has its own booking service, to remove listings for LEA over its mistreatment of Lasah. Recently, TripAdvisor announced that it will stop selling tickets to animal attractions that feature any form of abuse or exploitation of wild and endangered species like elephants.

We can all do our part to help Lasah. We’ll need to continue spreading the word about his plight. And we’ll need to start boycotting Langkawi Elephant Adventures.