The Plight of the Great Barrier Reef serves up a Warning 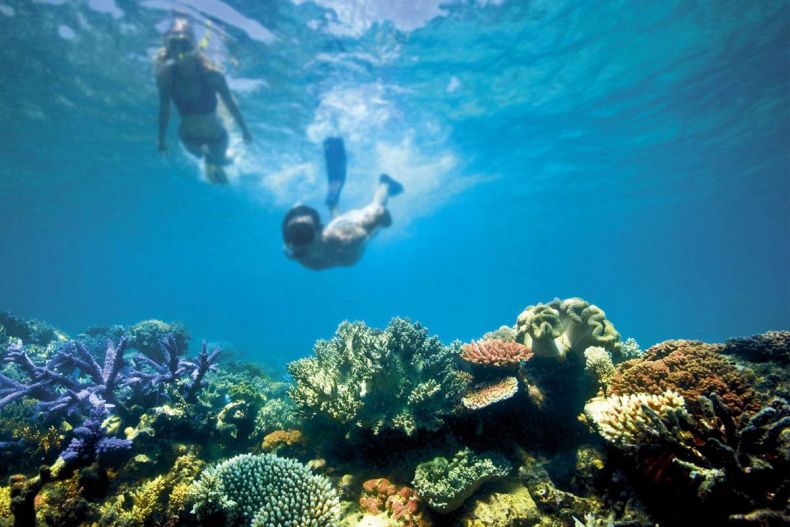 The Great Barrier Reef is one of the world's natural wonders. How long they will remain so is now in doubt. Photo Credit: barrierreef.org

The Great Barrier Reef, one of the world’s natural wonders, is in terminal decline. And there is little anyone can do about that because of the relentless onslaught of climate change.

So say experts tasked with saving the reef from extinction. “Members agreed that in our lifetime and on our watch, substantial areas of the Great Barrier Reef and the surrounding ecosystems are experiencing major long-term damage which may be irreversible unless action is taken now,” stresses the Independent Expert Panel, a group of professionals whose job is to advise policymakers in Australian on how to mitigate the effects of climate change on the stressed reefs.

Sadly, this in itself isn’t news. As we noted here months ago, two successive mass bleaching events last year and this year across much of the reef have pushed large swathes of corals beyond the point of no return. Many of the reefs could yet recover if not for further environmental stresses that lie in store for them in coming years, mostly as a result of warming temperatures. A campaigner for WWF has called the Great Barrier Reefs “a system in crisis.”

And because nothing in nature happens in isolation, once many of the reefs go, local ecosystems will likewise be dealt a heavy blow. The Great Barrier Reef serves a variety of ecological functions from providing shelter and food for fish to protecting coastal areas from battering waves. Yet with the drastic decline of coral cover at the reefs many of those functions will diminish or entirely disappear.

Needless to say, it isn’t just Australians that should worry about the fate of their nation’s famed reefs. The plight of those reefs down under has served up a warning to other countries about the precarious state of their own coral reefs, including Malaysia’s. In fact, scientists have begun identifying reefs that may be salvable in the years and decades to come. Some may not be savable at all.

Malaysian authorities are aware of the threats facing the nation’s world-famous corals and have warned that they are in dire straits. Well-conceived and well-implemented policies can mitigate the worst effects of climate change and other human-caused stresses on beleaguered reefs, but time is running out.