Let Puntung’s Death be a Lesson 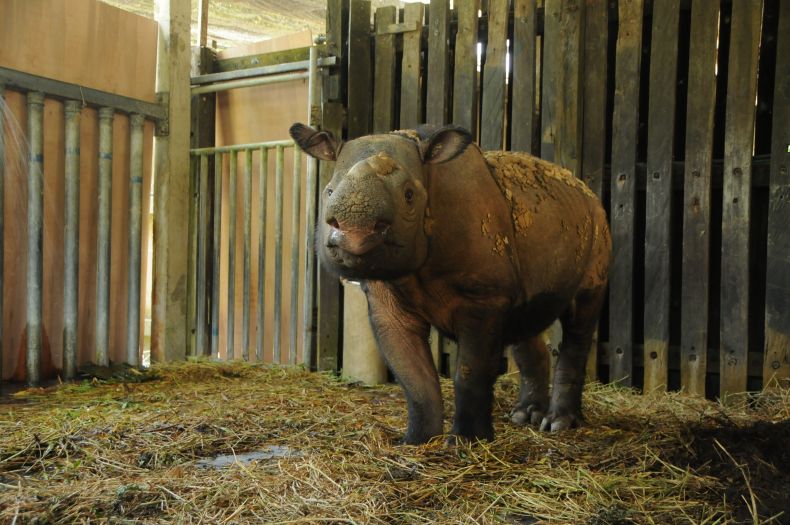 Iman is one of two Sumatran rhinos left in Malaysia, both in captivity. Photo Credit: WWF-Malaysia

To her keepers, Puntung, one of Malaysia’s last three Sumatran rhinos, was a precious animal beloved for her gentle nature. To animal lovers across the country and farther afield, she was no less precious: she was one of her species’ very last Mohicans in Malaysia. Her loss has dealt a further blow to efforts to bring the rhinos back from the very edge of extinction in the country.

Puntung has been euthanized after she was diagnosed with skin cancer and last-ditch efforts to improve her condition failed. The cancer that appeared in the form of a tumor in her left cheek in April was spreading rapidly and even treatment could only have prolonged her suffering but not her medical prospects. As a result, her keepers decided to ease the rhino’s suffering by putting her to sleep.

“Today is one of the saddest days we’ve ever faced,” the Borneo Rhino Alliance (BORA), which had overseen care for the rhino for years, announced in a Facebook post on June 4. “As of this morning, Puntung’s suffering has come to an end.  She was euthanized just past dawn, ending her battle against squamous cell cancer.

“It was one of the hardest decisions we’ve had to make, but euthanasia had become the only defensible option,” BORA went on to explain. “Chemotherapy, radiation treatment and excision surgery might seem possible. But for us, her welfare was the most critical element. Any of those treatments would bring further distress to Puntung because they would cause her further pain and, at best, give her a few more months of life.”

Complicating matters was that keeping the sick rhino in the sterile surroundings of a veterinary clinic for a long period of time would have added to her distress. “Sumatran rhinos wallow in mud for at least six hours daily and become increasingly stressed if kept in clean, closed facilities. A stress-free life for Puntung was simply not going to be possible,” BORA explained. 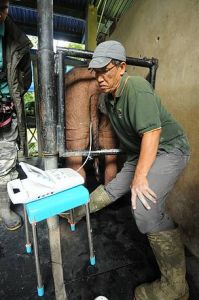 A veterinarian of the Borneo Rhino Sanctuary conducts an ultrasound scan on a captive rhino to examine its reproductive condition in Sabah. Photo Credit: WWF-Malaysia

The foundation has been working with BORA and the Sabah Wildlife Department (SWD) to save the country’s last rhinos. Saving the animals is no easy task. Sumatran rhinos were declared extinct in the wild in Malaysia in 2015, and the last three specimens, all of which are past the prime of their reproductive age, were taken captive to save them from poachers and to use them in an artificial breeding program in Sabah.

“Future generations would certainly blame us for failing to save this species from extinction,” Tun said. “I regret that it has come to this and let this be a lesson to all those related to the efforts as well as the world at large,” he added poignantly.

Puntung’s death has left only two other Sumatran rhinos, Iman and Tam, to remain in the country, both in captivity. The hope is that cutting-edge breeding technologies can still help save the animals in Malaysia through Tam, a male, and Iman, a female. “[M]aximising births in captivity seems to now be the only viable way to save this 20-million-year-old mammal species from extinction,” WWF-Malaysia notes.

Very sad indeed we’ve come to this. Telling too. Once numerous rhinos roamed far and wide in endless forests in Malaysian Borneo. Today no rhinos are left in much-diminished forests. We’ve decimated their habitats, even as poachers have driven them extinct merely for the keratinous protrusion on their noses, to which many people inanely continue to ascribe magical healing properties.

It was to save them from poachers that after four years of monitoring her in the wild, Puntung was captured in the Tabin forests in 2011. The aim was to ensure her survival in captivity, where she and the other two rhinos were closely guarded and protected. Yet fighting such rear-guard action, however heroic, to save animals extinct in the wild by keeping them and trying to breed them in captivity is a poor substitute for saving them in the wild in the first place.

“She survived a poacher’s attempt as a calf, when her foot was cut off,” BORA noted. “But she refused to give up and went on to survive in the forests. We’ll always remember her as a fighter.”

Sadly, even this intrepid and feisty rhino could not fight cancer for long. With her passing, we’ve lost one of our last three rhinos. Javan rhinos, which once too inhabited some of Malaysia’s forests, died out decades ago. Now Sumatran rhinos are on their way out too. Unless we become serious about protecting forests and their embattled inhabitants, it won’t be just rhinos: we’ll be losing tigers, pangolins, sun bears and other irreplaceable wonders of Malaysia’s nature, too.

Let Puntung’s death be a lesson and a warning to us all indeed.