Poachers in Sarawak boast about their Kills on Facebook. For Shame 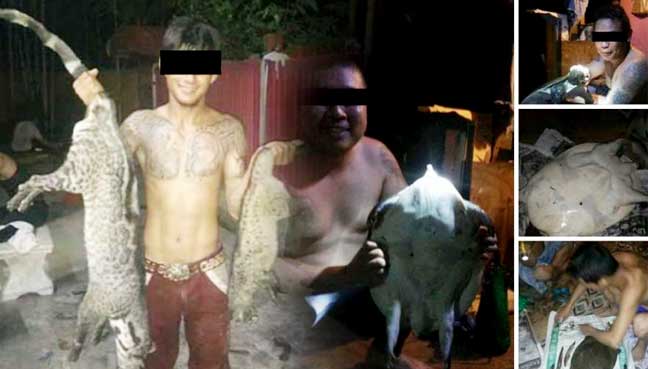 Poachers in Sarawak show off animals they killed, including a clouded leopard. Photo Credit: Facebook via Malaysian Digest

You might think that Malaysian authorities’ stepped-up efforts to clamp down on poachers and wildlife traffickers have these wrongdoers on the run. Poachers and traffickers are cowering in fear of arrest, doing all they can to remain undetected. Right? 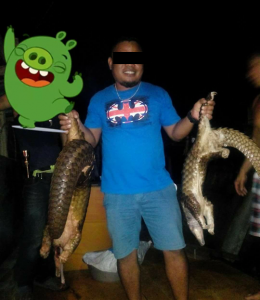 A poacher brags about having killed a pair of pangolins. Photo Credit: Facebook via Malaysian Digest

Some of the poachers clearly don’t give a hoot about the threat of law enforcement against them. In fact, they are so brazen as to boast about their kills on social media.

In a Facebook group in Sarawak, numerous poachers proudly showed off several animals they had killed. The animals apparently killed by several different groups of poachers and proudly flaunted on Facebook included critically endangered Sunda pangolins, a sun bear and a clouded leopard, in addition to a Malay weasel, an Asiatic softshell turtle, as well as langurs, macaques and snakes.

The poachers’ brazen publicity stunt outraged conservationists and animal lovers. “Some of the Facebook posts showing pangolins being processed have prices listed, indicating that the hunters know the value of the animal in the illegal trade,” observed Elizabeth John, a senior communications officer for TRAFFIC in Southeast Asia. “When species are wiped out, it does not bode well for the state, which uses nature tourism as a key selling point.” 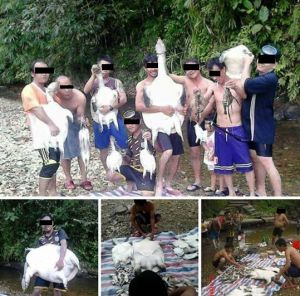 It does not, indeed. Nor does it look good on Sarawak that many local people clearly could not care less about endangered wildlife. All poachers and traffickers must be hunted down, just as they hunt down endangered animals, and punished for breaking laws.

Sadly, the chances of that happening aren’t good. “The [Facebook] postings send a message that the likelihood of being arrested or prosecuted for a wildlife offence is very low,” John, from TRAFFIC, noted.

Malaysia’s Wildlife Conservation Bill (2010) imposes mandatory prison terms of up to five years and a minimum fine of RM100,000 for killing critically endangered species like pangolins and clouded leopards. Yet laws are mere words on paper under they are rigorously enforced.

Complicating matters that in Orang Asli communities hunting rare animals like tigers and leopards is considered a traditional way of manliness. Nor do many Orang Asli people look on wild animals as creatures worth protecting: they are merely sources of food and extra income, much as barnyard chickens and goats are.

That’s why educational projects in such communities are vital to change entrenched old ways of thinking. By saving forests and their wild inhabitants, Orang Asli communities will ultimately be saving themselves.