A Baby Elephant is Killed on a Highway in Perak 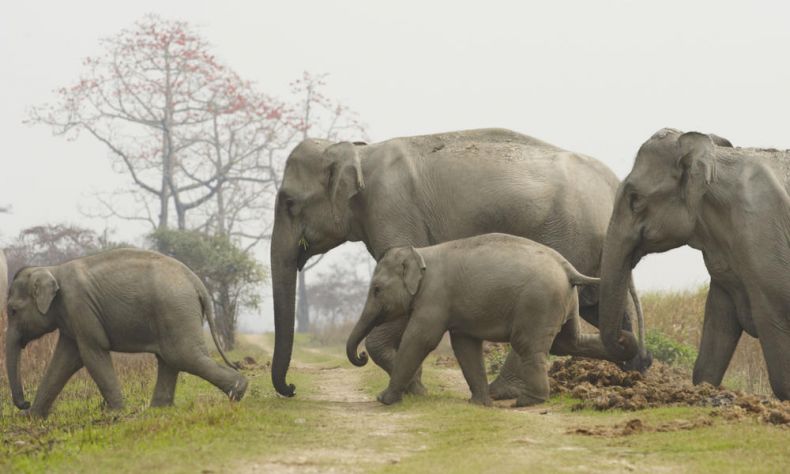 A group of wild elephants walks across a village road. Photo Credit: WWF

Malaysia’s beleaguered wild elephants face a variety of daily dangers. They may be poached for their body parts. They may be poisoned by smallholders and plantation owners to keep them off their properties. And they may be killed in road accidents.

A young elephant calf has just suffered that fate in Gerik. The two-year-old jumbo was found dead, lying in a pool of blood, by the side of the Gerik-Jeli Highway in Gerik, in Perak state. The juvenile pachyderm had likely been killed by a vehicle while it was trying to cross the road.

Such incidents involving elephants are relatively rare in Malaysia, but numerous wild animals fall victim to vehicular accidents regularly, from deer to tapirs. 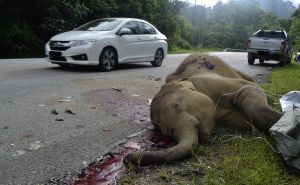 An elephant calf, killed in a road accident, lies by the side of the road in Perak. Photo Credit: Alicia Solana Mena/ MEME

The stretch of highway where the young calf was killed has long been highlighted by conservationists as a dangerous spot for wild elephants. Jumbos from the Royal Belum State Park and Temenggor Forest Reserve in the area often wander around the highway, especially in early morning and late at night when visibility is low, as they forage for food. Wild elephants tend to cover large distances in search of a varied diet and during their travels they are exposed to risks, including accidents on the roads they need to cross to get from one part of the forest to another.

The young elephant was found by members of the Malaysian conservationist group Management and Ecology of Malaysian Elephants (MEME). “We are devastated to see a baby elephant killed by a car at Gerik-Jeli Highway,” Alicia Solana Mena, a field manager and elephant tracker for MEME, wrote in a Facebook post, which displayed images of the dead calf taken at the site.

The conservationist has urged Malaysian motorists to remain alert while driving through wildlife areas. “Drivers please slow down at roads with wildlife crossings,” she wrote. “Be mindful of our forest friends. Let’s not cause them any more harm. They have already lost so much when we took their forest to build roads on.”

Drivers will indeed need to be careful as the chance of similar accidents involving wildlife will remain high. Many wild animals, elephants included, are being boxed into ever-shrinking habitats by encroaching development, and deprived of ample roaming grounds they often have no choice but to venture into populated areas where they are at increasing risk of being hunted, killed or run over.

“Wild elephants have already lost so much of their forests and more of them are coming out to roads to find food like grass, palm trees and bamboo,” Ahimsa Campos-Arceiz was quoted as saying by the BBC news service. “They are also spending more time hanging around roads,” he added. “As Malaysia develops, it needs to compromise, especially in this landscape which houses one of the most important forests in South-East Asia. Elephants need to roam freely and safely.”