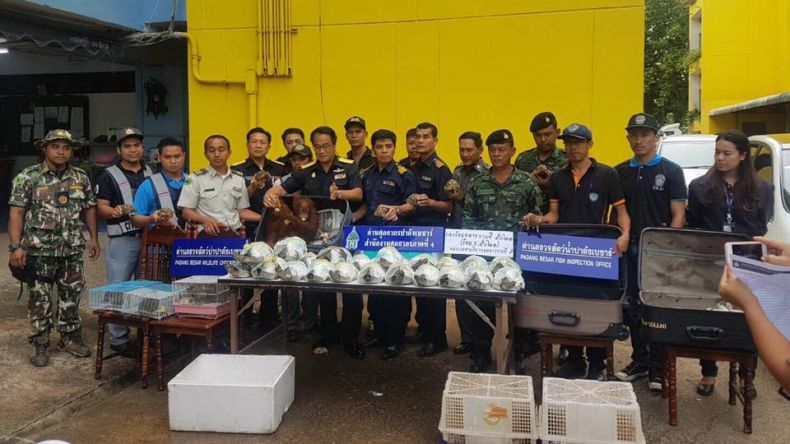 Thai police officers pose for a picture with the baby orangutans and turtles that were smuggled illegally into the country from Malaysia. Photo Credit: Wildlife Friends of Thailand 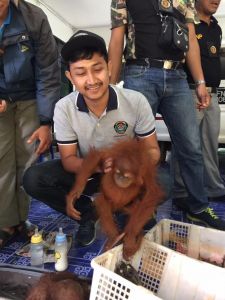 One of the baby orangutans seized from a Malaysian smuggler in Thailand. Photo Credit: Wildlife Friends of Thailand

Also in the car with the man were scores of turtles, which had been wrapped tightly in plastic tape so they could not move. The animals had just been smuggled into Thailand from Malaysia and were destined for the local exotic pet trade.

“A Malay man driving the car said he took the animals over the border from Malaysia and was hired to deliver them to an address in Hat Yai city,” explains the conservationist group Wildlife Friends of Thailand in a Facebook post. “The man was arrested by police and hopefully will not be set free on bail as he will surely flee back to Malaysia as happened in the past. The confiscated turtles have been send to a government breeding centre, the two orangutans have been handed over to Songkhla Zoo.”

This recent discovery of yet more illegally smuggled orangutans is further proof of rampant trafficking in the critically endangered primates. According to the Great Apes Survival Partnership (GRASP), an alliance of NGOs and governments, hundreds of orangutans have been trafficked over the years within Malaysia and Indonesia as well as out of the two countries.

Thailand is one of the foreign destinations where Malaysia’s trafficked orangutans routinely end up. Last December, for instance, two baby orangutans were rescued from traffickers in Bangkok by Thai police following a tip-off. The two juveniles were just about to be sold off to local wildlife traffickers.

“The smuggling of orangutans from Indonesia and Malaysia into Thailand has recently seen a shocking increase again with the apes popular as pets also destined for Laos and China where they are used to entertain zoo visitors,” Wildlife Friends of Thailand says. “WFFT [World Wide Fund for Nature-Thailand] earlier this year handed over information to authorities pointing out that Hat Yai City is a hotspot for the smuggling of orangutans into and through Thailand.”

The rampant illegal trade in Malaysia’s orangutans is helping push the country’s beloved primates ever closer to the brink of extinction in the wild. It must be stopped.