We can't plant enough plants to suck all the excess CO2 out of the atmosphere. Photo Credit: Pexels

One way of mitigating the adverse effects of man-made climate change is to plant trees. The more trees there are, the more CO2 they absorb from the atmosphere, thereby alleviating the greenhouse effect because plants build their roots, stems and leaves from the CO2 they suck out of the air.

Here’s the thing, though: it’s not a cure-all option. Why? Because to offset the massive amounts of carbon dioxide that we’ve been pumping into the atmosphere, we would need to plant so many trees that there would be little space left for anything else on land around the planet, according to scientists at the Potsdam Institute for Climate Impact Research in Germany. The scientists have calculated that the size of the required plantations would be so vast that they would have to take the place of natural ecosystems worldwide.

“In this scenario, they would replace natural ecosystems on fertile land the size of more than one third of all forests we have today on our planet,” the scientists explain. Either that, or we would lose most of our crops because “more than a quarter of land used for agriculture at present would have to be converted into biomass plantations – putting at risk global food security.” 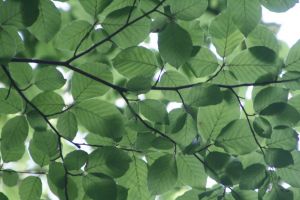 Needless to say, neither option is feasible. What we can do, however, is grow biomass “in well-selected places with increased irrigation or fertilization” so as to keep the increase in global temperatures under 2 degrees Celsius, a threshold widely regarded as manageable. But to do so, we will also rein in our CO2 emissions globally.

“If we continue burning coal and oil the way we do today and regret our inaction later, the amounts of greenhouse gas we would need to take out of the atmosphere in order to stabilize the climate would be too huge to manage,” said Lena Boysen, the lead-author of a new study published in Earth’s Future, a journal of the American Geophysical Union.

“Even if we were able to use productive plants such as poplar trees or switchgrass and store 50 percent of the carbon contained in their biomass,” she added, “in the business-as-usual scenario of continued, unconstrained fossil fuel use the sheer size of the plantations for staying at or below 2°C of warming would cause devastating environmental consequences.”

In other words, we have to reduce our CO2 emissions in line with the Paris Climate Agreement, rather than hope that we can solve the problem of excessive atmospheric CO2 by creating vast biomass plantations later on, as it has been suggested. “Our work shows that carbon removal via the biosphere cannot be used as a late-regret option to tackle climate change,” says Tim Lenton of the University of Exeter, in the UK, who was a co-author of the study. “Instead we have to act now using all possible measures instead of waiting for first-best solutions.”