Two Turtles head back into the Ocean 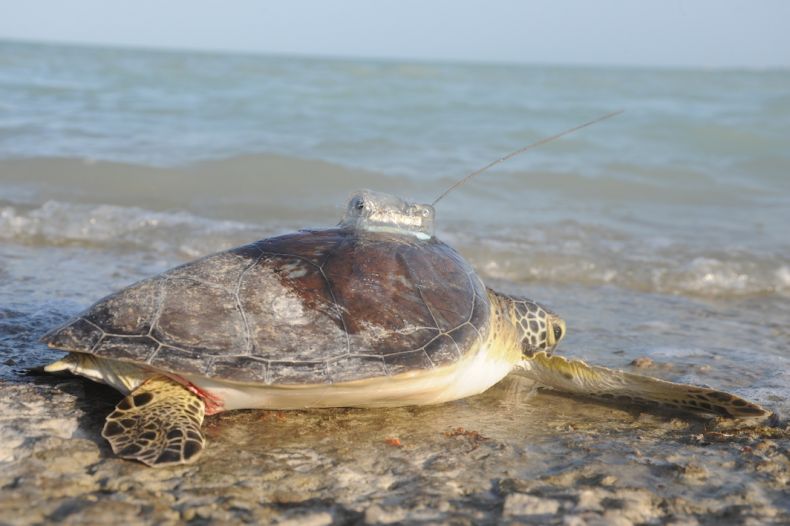 A green sea turtle, equipped with a satellite tag for monitoring, makes its way back into the sea. Photo Credit: Marine Research Foundation

Few things gladden conservationists and animal lovers more than seeing animals captured from the wild released back into their natural habitats. And so it was in high spirits that members of the Sabah Wildlife Department’s Wildlife Rescue Unit released two green sea turtles back into the sea near Pulau Mabul.

Both turtles were found ailing in May and were nursed back to life at the Mabul Turtle Rehabilitation Centre. “The two turtles [were] in a weak state [and] rescued back in May. They were cared for by the WRU,” a statement issued by the Wildlife Rescue Unit said. “The turtles recuperated well under the critical care given by Scuba Junkie staff of the Mabul Turtle Rehabilitation Centre.” 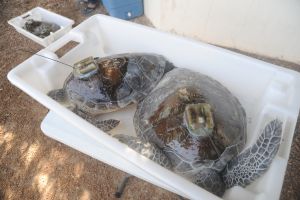 The turtles before they were released. Photo Credit: Marine Research Foundation

Before they were let go, the reptiles were equipped with satellite tags so that experts from the Wildlife Department and the nonprofit Marine Research Foundation could monitor their movements and see how well they readjusted to their environment. “[The tagging] will also let us know the areas the turtles inhabit, allowing us to concentrate conservation efforts in those areas,” said Nicholas Pilcher, the foundation’s director.

Malaysia’s sea turtles definitely need all the help they can get. The placid reptiles have been losing out to rampant coastal development, which has deprived them of many of their traditional nesting grounds, in places like Sabah and Melaka.

“Over the past 20 years, reclamation has gobbled up swaths of ocean along Malaysia’s western coast, creating a man-made landscape of homes, offices, deep sea ports and cruise ship terminals,” explains the online conservationist journal Mongabay. “The state of Melaka, with its historic city overlooking the Strait of Malacca, began reclamation in 1974, but the process has gathered pace over the past two decades and a slew of recent projects have deepened concern about the environmental cost.”

Groups of dedicated conservationists have been working around the clock to save the animals from further harm. They have been running artificial hatching programs for the turtles and have succeeded in boosting their numbers in certain areas like Labuan. Rewilding can also make a difference by helping boost the numbers of turtles in local waters.

Godspeed to the two newly freed turtles. May them fare well back in the ocean.