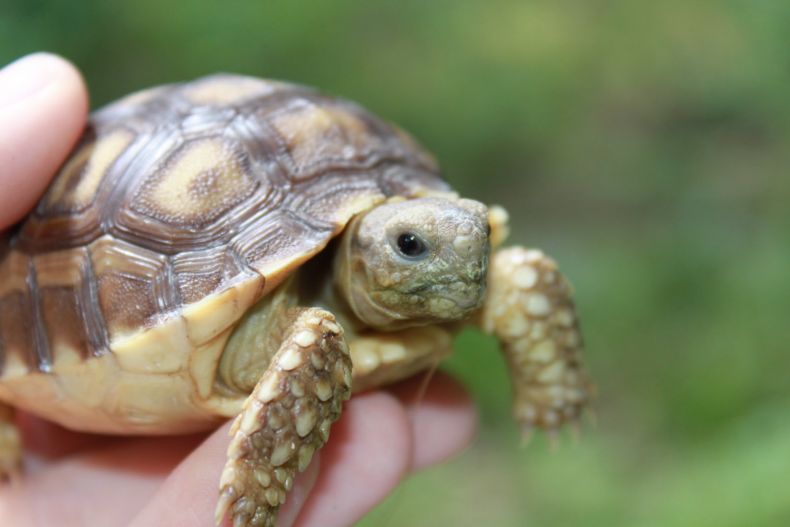 Two Thais and a Malaysian man have been arrested for trying to smuggle eight rare sulcata tortoises, also known as African spurred tortoises (Centrochelys sulcata), through Malaysia’s border with Thailand. The trio of smugglers, who were between 24 and 28, tried to cross the border with the reptiles hidden in their car via Perlis. The three men are facing a prison term of up to two years and a fine of up to RM50,000, or both, for violating anti-trafficking laws.

Most likely, the African tortoises were destined for Malaysia’s booming exotic pet trade where the animals are prized by many turtle enthusiasts. Numerous exotic turtles are smuggled into the country and out of it with depressing regularity. Often trafficked turtles don’t survive their ordeals, suffocating or starving to death in boxes where they’re bound up in duct tape to stop them from moving around.

There’s also a thriving market in them within Malaysia, where turtles and other exotic animals are often traded online. Small and juvenile turtles are especially prized. As we have pointed out repeatedly here on Clean Malaysia, just as all other trades, legal or illegal, wildlife trafficking, too, responds to demand. We can all reduce or even eliminate that demand by refusing to buy or sell endangered animals and by reporting those people who continue to traffic in them.

“Turtle species are seriously threatened [and] nowhere more so than in Asia with 17 of the 25 most critically endangered tortoises and freshwater turtles on the IUCN Red List found in the region,” James Tallant, a senior program officer for the International Union for Conservation of Nature and Natural Resources, recently pointed out.

All illegal trade in exotic turtles and other vulnerable species of wildlife (be they reptiles, mammals, fish or birds) must stop.