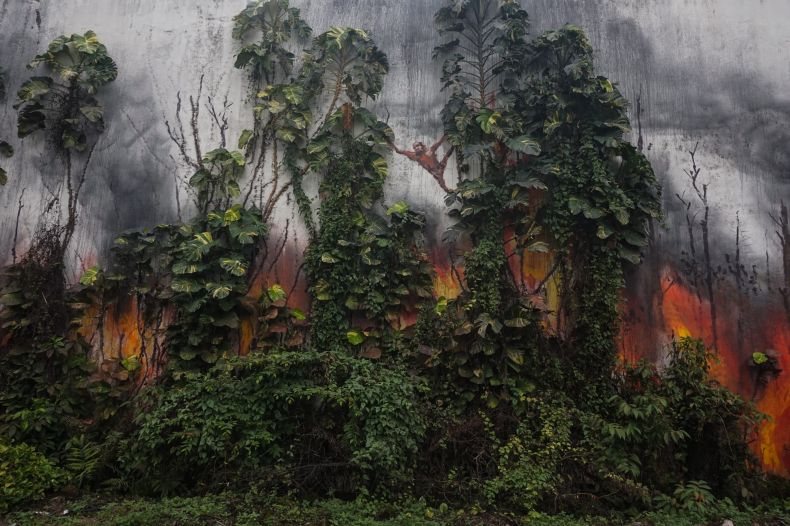 A public mural in Sumatra highlights the destructive nature of slash and burn agriculture. Photo Credit: Slash and Burn

Slash and burn agriculture is a crime against nature. Yet it remains an all too common practice in Indonesia and parts of Malaysia. In nearby Sumatra vast swathes of forest are routinely torched so that ever more palm oil plantations can take the place of jungles.

The environmental damage from such wanton large-scale destruction is incalculable. Ecosystems in large areas may end up being wiped out. Numerous animals and human communities may be displaced. The air is often polluted with noxious fumes for months on end over vast areas.

But now a group of artists is fighting back in the way they know best: by producing art. 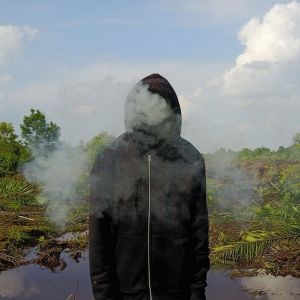 An artistic installation by Slash and Burn inside peatland in Sumatra takes a stance against forest burning. Photo Credit: Ernest Zacharevic

A public art project in Sumatra, which is appropriately called “Splash and Burn,” seeks to serve as an “awareness campaign responding creatively to unregulated farming practices of palm oil in Indonesia,” explain the artists, who have set about “tackling issues such as the transboundary haze, deforestation, human and animal displacement.”

The project is spearheaded by Ernest Zacharevic, a Lithuanian artist based in Penang who has been dubbed “Malaysia’s answer to Banksy” by the BBC, in reference to the famously subversive British street artist. Under Zacharevic’s guidance, a select team of local talents have been painting murals and erecting sculptures throughout towns, cities and the countryside on the Indonesia island, which has long been a ground zero of deforestation in Indonesia. They have been at it since February.

It was in the summer of 2015, when transboundary haze from Sumatra reached all he way up to Penang, that the Lithuanian artist began thinking of a way to raise awareness of the scourge of slash and burn land clearing on the environment. Soon he joined forces with the Sumatran Orangutan Society and teamed up with several like-minded artists.

The idea is “to take a bit of a creative angle to the entire issue, rather than just talking statistics and facts,” Zacharevic explains in a video shot by the BBC. He added that his team of artists wants to challenge the problem at its source by challenging Indonesia’s palm oil industry over its rampant destruction of natural habitats.

Similar eco-art projects have also been conducted in Malaysia. In one, punk rockers in Sabah have been creating paintings and other artworks with conservationist messages. In another locals in the Bornean state came together to fashion artistic installations from trash in an effort to raise awareness of our wasteful ways.

Art can have transformative power. It’s great to see that power deployed for the sake of our beleaguered natural environments.